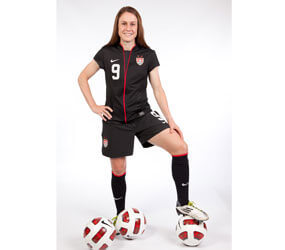 O’Reilly participates in a Bible study and prayer group with some of the women on her team and told Catholic News Service, “You find a lot of bonds that way.”

“It lets you connect on a different level because you see how it (faith) affects their everyday life in soccer,” O’Reilly told CNS in a telephone interview June 9, days before leaving for the FIFA Women’s World Cup in Germany.

“After games or before games, some of the girls get together and pray. It brings people together. We share such a love of soccer, but also God and Jesus,” she said.

At only 26, O’Reilly already boasts an impressive record in the women’s soccer world. She was part of the 2008 Olympic Gold Medal team, played on the 2004 Olympic team and is one of the fastest players on the national team. With 29 career goals, she is the 14th all-time female goal scorer in U.S. history. In the beginning of 2011, she broke the U.S. Soccer women’s record for consecutive games played, at 63.

The former altar server at St. Bartholomew Parish in New Brunswick, N.J., will be playing in her second FIFA Women’s World Cup when the United States meets North Korea in Dresden, Germany, June 28.

Growing up in a Catholic family, O’Reilly attended St. Bartholomew School, East Brunswick High School and later the University of North Carolina at Chapel Hill, where she studied education.

O’Reilly told CNS that her Catholic faith taught her to always strive to be a good teammate.

“Even at the highest level, it’s important to be able to relate and connect with everyone on your team. You know, treat others as you want to be treated,” she said.

O’Reilly said she plans to spend some of her downtime between matches finalizing her wedding plans.

“There are always details to smooth over,” she said lightheartedly.

She will marry Dave Werry during an Oct. 1 Mass at St. Thomas More Catholic Church in Chapel Hill. The two met during their time as undergraduates at the University of North Carolina and the couple completed marriage preparation classes near where they live in New York City.

O’Reilly said the biggest challenge for her during this World Cup will be to really want the ball at all times.

“I have the ability,” she said confidently, “it’s just a matter of being brave when circumstances are tough.

“We’re capable of winning this thing, we just need to play well consistently,” she said, noting that her team has had ups and downs.

When asked about any special rituals she has to get geared up for a game, O’Reilly responded: “I don’t have many superstitions, but I think that I’m someone who needs to bounce energy off other people. I need to stay loose. I just try to train and keep good habits at practice day in and day out and, if I keep doing what I’m doing, I’ll do well on the field.”

When O’Reilly is stateside and off the field, she volunteers with America SCORES, an after-school program that combines soccer and literacy initiatives in urban environments. O’Reilly told CNS she always leaves with a smile on her face after volunteering.

“I have had a very blessed life, and I think everyone has a responsibility to give back,” she said.

She said that on her ideal soccer-free day, she would not set an alarm clock. Instead, she would sleep in and go out for a big brunch with her friends and fiance.

“I would maybe even get a pedicure and see a movie,” she said.

While excited for the World Cup, O’Reilly is very passionate about Women’s Professional Soccer in the United States.

“It has the best players in the world,” she said.