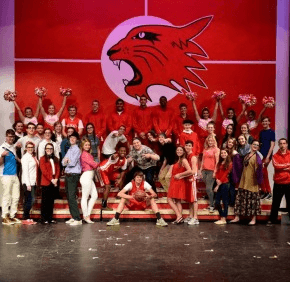 By Maria Wiering
mwiering@CatholicReview.org
BEL AIR – “Everyone needs to pay attention to detail!” Kimberly Brueggemann commanded the 50 actors seated for performance notes in The John Carroll School auditorium Nov. 3. It was three days before opening night, and every aspect of the fall musical was under scrutiny – including the actors’ shoes.
“No Sperrys; it looks horrible,” admonished Larry Hensley, head of John Carroll’s guidance counselling. He was assisting Brueggemann, the performing arts director, in directing the school’s fall show, Disney’s “High School Musical.”
Hensley’s comments were directed at actors playing athletes, who needed to wear white gym shoes, no exceptions. He also instructed a lead actor to exchange black shoes for red.
At John Carroll, it’s not just the singing, dancing and acting – the minutia matters, too. Even actors’ socks are open to criticism, Hensley told the Catholic Review.
“We push it to the next level,” Hensley said. “We’ve raised it to a bar, that now we have to be at that bar, or above it. Sometimes that makes us go crazy.”
Under the leadership of Brueggemann, Hensley and Laura Lang, a John Carroll alumna and its former marketing director, the high school’s spring and fall musicals have become a tour de force for the school and wider community.
Preparing for a show is hard work, but it’s also fun, said Brady Fritz, 17, a senior who plans to study musical theater in college – and maybe, like a few other John Carroll alumni, perform on Broadway.
“It (musical theater) definitely makes me more outgoing and not afraid of what people think of me,” said Fritz, who played the show’s male lead.
Brueggemann calls “High School Musical” a modern-day “Grease,” where a guy and girl from rival cliques fall in love. As the title suggests, the plot revolves around the duo’s casting as leads in a musical – one that brings together people from an array of social groups.
John Carroll’s productions do the same.
There are several jocks-turned-thespians in the program, Hensley said, because the shows have a “cool factor.” In his nine years on school staff, he’s seen an influx of school-wide support and appreciation for the theater-arts program, in part from the popularity of shows such as “Glee” and the relationships John Carroll’s directors build with students.
Since his sophomore year, Jake Rosaschi has coordinated his theater commitments with football and lacrosse practices. At first, he was hesitant to join the musical because he thought fellow athletes might disapprove, but pursued a role in “Aladdin” anyway. A respected senior then told him he thought it was cool he was in the play, and confessed he wished he had done both sports and theater, too.
Rosaschi wrote about the lessons he’s learned from the stage for his college admissions essay. As someone used to team sports, he dreaded the spotlight, he said. Now he’s overcome stage fright, which may serve him well in his career, he said. He hopes to act in the school’s spring show, “Joseph and the Amazing Technicolor Dream Coat.”
Rosaschi’s takeaway is the message of “High School Musical,” which, he said, “kind of mirrored my life.”
“It made me realize there’s not that big of a difference between social groups. It’s just the stereotypical image that everyone has of them,” he said. “The kids that I see in the locker room and the kids that I see backstage are goofing off in the same exact way.”
Also see:
Beyond the Bell: Mount de Sales Club supports the troops
Beyond the Bell: Social Justice Coalition at Maryvale makes a difference
Beyond the Bell: Seton Keough’s A Cappella choir
Beyond the Bell: Catholic High robotics team raises the bar
Beyond the Bell: St. Frances Academy football takes leap of faith
Beyond the Bell: Calvert Hall’s peer ministry program makes faith cool
PrevNext