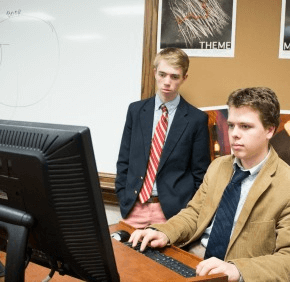 By Melody Simmons
Special to the Review
John Huebler Jr. prided himself on his athletic ability, but then an attempt to make the freshman soccer team at Loyola Blakefield fell disappointingly short.
He nonetheless found a competitive outlet, one that involves assists, passing and scoring of a more cerebral nature.
“I heard about forensics, so I stopped in and I checked it out,” said Huebler, now a junior. “Today, I can go back to that coach and thank him, because this has really been great for me.”
Huebler and his teammates on Loyola Forensics, he said, have learned research skills as well as extemporaneous speaking dexterity and a greater sense of self.
“Any paper I have to write is just a breeze,” Huebler said. “I know all the secrets of Google, and all the secrets of looking through articles, what I have to look for and how to use the footnotes to find out what is actually relevant to what you need.”
Forensics has carved out its substantial niche at Loyola Blakefield.
It is the 11-time champion of Baltimore Catholic Forensic League (BCFL), a group of 50 schools in the metropolitan area that, despite its name, includes private and public schools.
The Dons have won that championship 20 of the past 24 years, and were champions of the National Catholic Forensic League in 2005 and 2010, besting more than 1,000 high schools.
In September, Loyola Blakefield competed at a tournament in Texas. Some members attend summer workshops at schools such as Dartmouth, the University of Florida and the University of Michigan.
It is all under the direction of coach Charles Donovan, a biology and physics teacher.
“There are so many valuable skills that this activity teaches,” he said. “Being able to communicate effectively is important no matter what job you have, no matter what college you go to. Being able to speak face-to-face with someone, as opposed to (on) Twitter or Facebook, is a skill that’s very valuable.”
Kurt Manion, a senior who fancies himself a budding philosopher, helps underclassmen form arguments as they prep for competitions that include a four-minute debate, a 10-minute speech and a live question-and-answer session with judges.
Manion noted the broadness of debate topics, such as: “A just society ought to presume consent for organ procurement from the deceased.” The exercise centered on organ donors and whether such a program should be an opt-out or opt-in system.
Matthew Hawkins, 14, a freshman, joined the forensics team to strengthen his speaking skills.
“I’ve learned how to form an argument from a debate and how to speak against an argument,” he said. “Now I can actually understand things better, “and I started gaining confidence where I could actually begin speaking well.”
Freshman Jon Pejo, 14, said he is trying to overcome jitters.
“I was really nervous,” he said, of his first debate. “I knew what we were trying to present, but I didn’t know how to present it. … I learned that you should always come prepared and even if everything seems like it’s crumbling apart, you should keep trying and not give up.”
Junior Aidan Bissell-Siders, 16, is in his third year on the team. His focus this year is on Lincoln-Douglas Debate, which is a competition where individual students tackle values and philosophical issues.
“It is really rewarding in trying to reason why things are valuable,” he said, “because sometimes people just assume that something is good or something is bad and they really don’t have a reason why.”
Loyola Blakefield will host a BCFL competition Jan. 10 that will draw approximately 35 schools.
Also see:
Beyond the Bell: Wide-ranging ensembles set apart Spalding’s music program
Beyond the Bell: With school-wide support, annual musicals take John Carroll’s spotlight
Beyond the Bell: Mount de Sales Club supports the troops
Beyond the Bell: Social Justice Coalition at Maryvale makes a difference
Beyond the Bell: Seton Keough’s A Cappella choir
Beyond the Bell: Catholic High robotics team raises the bar
Beyond the Bell: St. Frances Academy football takes leap of faith
Beyond the Bell: Calvert Hall’s peer ministry program makes faith cool
PrevNext