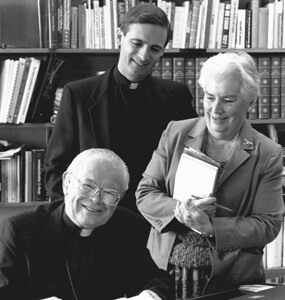 A 10 a.m. funeral Mass will be offered March 27 at Villa Assumpta in Baltimore. Viewings will be held March 25 at the Mitchell-Wiedefeld Funeral Home in Baltimore from 2-4 p.m. and March 26 from 7-9 p.m.

The oldest of seven children born to John and Edna Sweeney of Blessed Sacrament parish in Baltimore, Ms. Sweeney attended Towson Catholic High School and the College of Notre Dame of Maryland in Baltimore.

During the Second World War, she worked as a stenographer at Fort Holabird before teaching in Annapolis and Saratoga Springs, New York.

Ms. Sweeney began working for Baltimore archbishops in 1962 and spent 32 years in her position.

In a 1994 interview with The Catholic Review on her retirement, Ms. Sweeney remembered that one of the most challenging times on the job was when the archbishop’s office received hate mail after Cardinal Shehan issued his statement on racial justice in 1963.

“We got hundreds (of letters) in response,” she said.

People complained about changes in the liturgy, and the cardinal once said to her, “Don’t they realize the changes are hard for me, too?”

In The Catholic Review interview, Ms. Sweeney said each of her bosses had a “very pastoral approach,” but different personalities.

“I’ve looked on this as a vocation,” she said. “I just enjoyed every day of it. To do this work and feel I’ve contributed to the church is a blessing.”