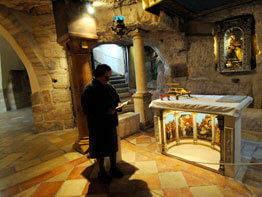 BETHLEHEM, West Bank – The rows of framed letters and baby pictures are testimony that the Milk Grotto – where Mary is said to have nursed Jesus as the Holy Family fled to Egypt – has been much more than a pilgrimage to many couples.

One picture on the wall of the Milk Grotto’s chapel shows a mother from Argentina happily nursing her newborn baby. In another letter a mother from Spain wrote, “Carmen is a gift from heaven.” A couple from Ireland wrote, “In thanksgiving and deep gratitude to Our Blessed Lady for our dear son Jamie.”

Another mother from India described how she and her husband had given up on a child after nine years of trying to conceive. Now, she wrote, after the birth of their daughter, her “whole life will be a life of thanksgiving.” From Venezuela another woman wrote how after five miscarriages she gave birth to a “miracle baby, Leonardo Jose.”

One after another, parents from such far-flung places as Sri Lanka, the United States, Canada, Bermuda and England have written about the miraculous birth of their children after having prayed using the “milk powder” from the grotto.

“Throughout the centuries this has been a place for special devotion for women … who are trying to conceive,” said Franciscan Brother Lawrence, an American who oversees the grotto and chapel for the Franciscan Custody of the Holy Land. According to tradition, he said, a few drops of Mary’s milk dropped onto the cave floor as she stopped to nurse her child.

“Women who can’t have children have a very hard time. With this prayer they are filled,” he said.

Some people have even brought their babies back to the small shrine inside the grotto to give thanks, he said.

The grotto is at least 2,000 years old and the early Christians came to pray here, he said, but the first structure was built over it around 385.

The faithful have venerated the spot for its powers as early as the fourth century, he said, and local women of all faiths and denominations come here to pray for children, taking with them bits of the “milk powder” from the soft limestone found throughout the grotto.

Holes the width of a finger can be found in several spots in the grotto ceiling of the newly renovated shrine, where over the years people have scraped out the fine dust to take home with them.

About 10 years ago when Brother Lawrence came to the grotto the Franciscans began preparing small packets of the limestone powder to give people for a small donation. They do not sell the powder online, he said, because the number of requests would be overwhelming and expensive to fill. Plenty of limestone to last for years is in blocked-off places in the grotto, said Brother Lawrence.

Sometimes friends and relatives of a couple trying to conceive have visited the shrine and take back the powder with them, and people have written attesting to the powder’s power to heal illnesses and reverse breach babies, he said.

The renovations on the shrine, which were started three years ago and completed at the end of 2006, have revealed sixth- and seventh-century Byzantine mosaic floors. The walls and ceiling were cleaned of soot from centuries of oil lamps and candle-burning. The structure was made handicapped-accessible, and a larger chapel was added on the second level to accommodate pilgrim groups who want to celebrate Mass there. A local Mass is held every Wednesday afternoon in the small church adjacent to the grotto.

The Sacramentine Nuns hold a round-the-clock prayer vigil in shifts at a special altar behind a glass window in a cordoned-off part of the shrine.

Faithful of all religions and denominations continue to venerate the grotto, said Brother Lawrence. Every denomination has a different form of prayer with the powder, he said, but according to Catholic tradition both the husband and wife must drink a bit of the powder mixed with milk or water for nine days and recite the prayer for the third joyful mystery of the rosary, said Brother Lawrence.

“They pray from their heart asking Our Lady of the Milk for intercession in healing,” he said, noting that he has heard of 1,700 babies born in the last 10 years and has read every one of the 400 letters that have been sent to the shrine, including 60 in the last six months.

“The joy is immense,” he said. “When you have faith you can move mountains.”

Brother Lawrence said he knows there are people who are skeptical about the powers of such holy relics, and the powder’s mystery probably will not work on those who do not have faith.

“Faith is a gift from God,” he said. “We who have been baptized have to be open to the Spirit. We need for our faith to be alive and that will enrich us.”