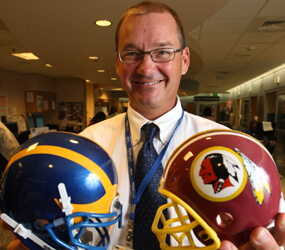 Despite the reaction they elicit among many football fans and media analysts, a concussion is not a laughing matter, “Got his bell rung” and “dinged” have long been in the sport’s nomenclature.

Earlier this decade, “Jacked Up!” was a popular feature on ESPN’s Monday Night Football, highlighting the game’s hardest hits. Last fall, a video of a University of California player vomiting after a well-timed tackle by an opponent from the University of Maryland went viral on You Tube.

While violent collisions are part of the game’s appeal, fans and players alike should be aware of the potential for permanent damage if resulting concussions aren’t treated with the proper urgency.

“What everyone needs to know is that there’s not a lot of treatment for a concussion,” said Dr. Kevin H. Scruggs, the chair of the emergency department at Good Samaritan Hospital in Baltimore.

“Treatment revolves more around prevention and recognition, and then rest,” he continued. “You basically have to be symptom free to return to action, all designed to let the brain heal and not incur a second injury while it’s still healing from the first.”

Scruggs, who will work several Ravens’ games this fall, heading the Rapid Sequence Intubation team that responds to blocked airways, has more than a clinical interest.

Raised in Montgomery County, he never lost his passion for the Washington Redskins. His desk holds a toy Redskins helmet, and one from the University of Delaware, which should appease Ravens fans.

“One of our daughters is a student there, and we started going to Delaware games when Joe Flacco was a senior,” Scruggs said, referring to the Ravens’ second-year quarterback.

According to Scruggs, the definition of a concussion has changed over the decades.

“You (once) had to have a brief loss of consciousness and a little amnesia, but that definition has evolved,” Scruggs said. “Now, a concussion is more what we call a closed head injury, ranging from minor to major.

“The symptoms can be obvious, when a football player is knocked unconscious and he wakes up and he’s vomiting. They can also be tricky. If somebody gets a shot to the head and they don’t lose consciousness, they’re kind of standing there … kids don’t want to come out of the game.”

Lingering confusion, headaches, memory loss, nausea and balance problems after a head injury are other indicators of a concussion. Whether they’re seen in a professional football player, a high school athlete, an elderly parent or a child who’s fallen off his tricycle, those symptoms merit prompt attention.

“Smaller children can’t tell you about the symptoms they’re experiencing, so we need to be diligent,” Scruggs said.

Scruggs emphasized that often, the only treatment is avoiding the activity that caused the injury in the first place.

“You get a second or third concussion, you’re pretty much done,” He said. “You don’t want to take the chance of developing learning difficulties and memory loss, sleep problems and other issues that have been attributed to multiple concussions.”