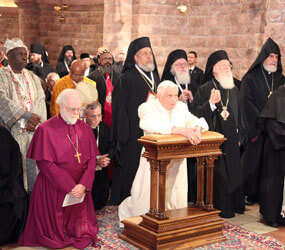 ASSISI, Italy – Taking 300 religious leaders with him on pilgrimage to Assisi, Pope Benedict XVI said people who are suspicious of religion cannot be blamed for questioning God’s existence when they see believers use religion to justify violence.

“All their struggling and questioning is, in part, an appeal to believers to purify their faith so that God, the true God, becomes accessible,” the pope said Oct. 27 during an interfaith gathering in the Basilica of St. Mary of the Angels.

Marking the 25th anniversary of the first Assisi interfaith gathering for peace, hosted by Blessed John Paul II in 1986, Pope Benedict brought together the religious leaders and – for the first time – four philosophers who describe themselves as humanists or seekers who do not identify with any single religion.

After a train ride of almost two hours from the Vatican, Pope Benedict and his guests arrived in Assisi and were driven to the Basilica of St. Mary of the Angels for the morning gathering focused on “testimonies for peace.”

Entering the basilica before the pope, the delegates created an unusually colorful congregation: They wore white, black or crimson robes or business suits; on their heads were skullcaps, turbans, scarves or veils.

The pope condemned the use of religion to excuse violence and the use of violence to impose a religion, as well as the growing violence resulting from “the loss of humanity” that comes from denying the existence of God and of objective moral standards.

“As a Christian, I want to say at this point: Yes, it is true, in the course of history, force has also been used in the name of the Christian faith. We acknowledge it with great shame,” Pope Benedict said.

Christian leaders, like all religious leaders, he said, must work constantly to help their followers purify their faith and be “an instrument of God’s peace in the world, despite the fallibility of humans.”

But a lack of religion is not the answer to world peace, he said.

The Nazi death camps clearly proved that “the denial of God corrupts man, robs him of his criteria (for judging right and wrong) and leads him to violence,” the pope said.

On the other hand, he said, many nonbeliever also are “pilgrims of truth, pilgrims of peace.”

“These people are seeking the truth, they are seeking the true God, whose image is frequently concealed in the religions because of the ways in which they are often practiced. Their inability to find God is partly the responsibility of believers with a limited or even falsified image of God,” he said.

“They challenge the followers of religions not to consider God as their own property, as if he belonged to them, in such a way that they feel vindicated in using force against others,” the pope said.

Sitting to the pope’s right were Orthodox Ecumenical Patriarch Bartholomew of Constantinople and Anglican Archbishop Rowan Williams of Canterbury, and to his left were Rabbi David Rosen, representing the chief rabbinate of Israel, and Wande Abimbola, president of a Nigerian institute that promotes the study of the culture and traditional religion of the Yoruba people. He chanted a poem, shaking a rattle made of an animal tusk or horn.

Eleven of the pope’s guests spoke before Pope Benedict did and, after the morning session, the pope invited the delegates to a “frugal lunch” of rice and vegetables, salad, fruit and juice. Patriarch Bartholomew sat on one side of the pope, while Archbishop Williams sat on the other. Thirteen other delegates – including Christians, a Muslim, a follower of Tenrikyo, a Buddhist and a nonbeliever – also were seated at the head table.

Rabbi Rosen, who also was at the pope’s table, said the meal ended with the pope wishing everyone a “buona siesta” or “good rest.”

In the afternoon, following thousands of young people who walked up to the Basilica of St. Francis, the religious leaders rode up the hill in buses.

Gathered in the square in front of the church’s lower level, the pope and 13 other leaders renewed their commitments to peace as the fog finally lifted from the plain below.

The leaders affirmed the obligation of love of neighbor, the conviction that true faith never can be used to justify violence, the responsibility religious leaders have to educate their followers to respect others and the need to continue interreligious dialogue.

Pope Benedict was the last to read his commitment. He said: “Violence never again! War never again! Terrorism never again! In the name of God, may every religion bring upon the earth justice and peace, forgiveness and life, love!”

After a moment of silence, the pope and other leaders were handed oil lamps similar to the one that burns before the tomb of St. Francis, just a few steps behind the stage. The event ended with the delegates exchanging a sign of peace and Pope Benedict exchanging a big smiles with the crowd.

Doves were released and one landed on the hand of one of the delegates who, beaming, gracefully lifted the bird above his head and showed it off.

Before leaving, the pope told the leaders, “We will continue to meet” and to “be united in this journey of dialogue” for the good of the world.

During the morning session in the basilica, Patriarch Bartholomew said the 25 years since the initial Assisi gathering have included the 9/11 terrorist attacks in the United States and the Arab Spring democracy movement, “which has not put an end to tensions between communities.”

“The place of religions in the changes under way remains ambiguous,” the patriarch said, echoing the concerns of many Christians that more radical followers of Islam may not protect the rights of Christian minorities in the countries that have thrown off dictatorships.

“We must oppose the deformation of the message and symbols of religion by perpetrators of violence,” said the Orthodox spiritual leader.

Archbishop Williams, spiritual leader of the Anglican Communion, told the participants they must help the world see how much wisdom religions have to offer “in the struggle against the foolishness of a world still obsessed with fear and suspicion, still in love with the idea of a security based on defensive hostility, and still capable of tolerating or ignoring massive loss of life among the poorest through war and disease.”

The Rev. Olav Fykse Tveit, a Lutheran minister and secretary-general of the World Council of Churches, urged the leaders to do more to assist and guide their young people, who can be the source of new energy for change – like with the Arab Spring – or can express their frustrations through violence.

He also pleaded with all the religious leaders present to pray and work for peace in Jerusalem, a city sacred to Jews, Christians and Muslims and a symbol of ongoing tensions among people of different faiths.

A Hindu representative from India, Shrivatsa Goswami, said the leaders needed to ask themselves why interreligious dialogue has not had a greater impact on the world situation in the last 25 years.

“Are we missing the inward part of the journey?” he asked. “Dialogue will be a futile exercise unless we undertake it with humility, forbearance, and the desire to respect the ‘other,’“ whether or not they return that respect, he said.

Hasyim Muzadi, general secretary of the Indonesia-based International Conference of Islamic Scholars, could not attend, but sent a speech. He said people of different faiths must work together to build on something they all share: “a hope for the creation of human harmony, justice, prosperity and an improved standard of human life.”

U.S. President Barack Obama sent a message to participants, saying, “Through interfaith dialogue, we can unite in common cause to lift the afflicted, make peace where there is strife, and find the way forward to create a better world for ourselves and our children.”

The message was delivered by Suzan Johnson Cook, U.S. ambassador-at-large for international religious freedom, and Miguel H. Diaz, U.S. ambassador to the Vatican, who attended the event.