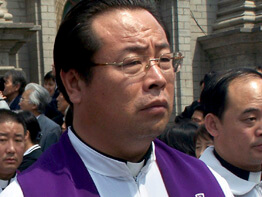 HONG KONG – A group of priests, nuns and laypeople of the Beijing Diocese have elected Father Joseph Li Shan as their new bishop, filling the see left vacant by the death of Bishop Michael Fu Tieshan.
Father Li works at St. Joseph Church – commonly known as Dongtang or East Church – in Wangfujing, a well-known shopping area in downtown Beijing. UCA News, an Asian church news agency, reported July 17 that church sources who asked not to be named said the election was conducted July 16.
The election result will be submitted to the Bishops’ Conference of the Catholic Church of China for approval. Once approved, the episcopal ordination would be held within three months.
This is the first election of a bishop in the registered church community of mainland China since Pope Benedict XVI’s letter to Catholics in China was released June 30. In that letter, the pope said the issue of episcopal appointments is “one of the most delicate problems” between the Holy See and the Chinese authorities. He said the appointment of bishops by the pope guarantees the unity of the church and hierarchical communion.
Usually, Chinese priests elected as bishops have been applying to the Holy See for approval; if such approval is given, it often is announced at the ordination. Three illicit episcopal ordinations occurred in 2006, and the Vatican issued statements denouncing them.
The church sources told UCA News that about 50 diocesan priests, 20 nuns and 30 laypeople – two lay representatives from each parish – took part in the polling.
Father Paul Sun Shang’en, an elderly Beijing priest who has been in charge of diocesan affairs since Bishop Fu’s death April 20, told UCA News July 17 that 93 voters took part in the election, and that a Liturgy of the Word and a homily preceded the balloting at the Beijing Conference Center. Father Sun said Father Li received 74 of the 93 votes cast.
He also said that Father Peter Zhao Jianmin, director of the Institute for the Study of Christianity and Culture of the Beijing Diocese, got 10 votes; Father Matthew Zhen Xuebin, rector of the Beijing seminary, received five; and Father Gao Yang, parish priest of St. Michael Church, got three.
Father Sun said no government official was present during the voting.
Church sources in Beijing confirmed that the polling did take place July 16 and that all the candidates except Father Li had studied abroad. They also said that government officials had earlier lobbied all priests to ensure that Father Li would be elected.
Another church source said priests and laypeople have high regard for Father Li and that he is competent in pastoral work.
Father Li, now in his early 40s, entered the Beijing seminary in 1983 and was ordained a priest in 1989. He has served in parishes and is currently vice chairman of the Church Affairs Commission of the Beijing Diocese, as well as a representative of the Beijing Municipal People’s Congress.