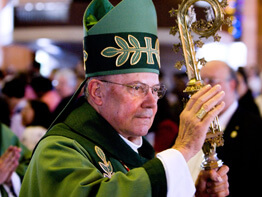 VATICAN CITY – As head of the Congregation for the Doctrine of the Faith since 2005, U.S. Cardinal William J. Levada has found that most of his work is behind the scenes.

The recent action against Jesuit Father Jon Sobrino was an exception: He was the first theologian to be publicly censured during Cardinal Levada’s tenure, and the case immediately brought the doctrinal congregation into the media spotlight.

Although some critics described the Vatican’s action against Father Sobrino as authoritarian, for Cardinal Levada it was an example of how carefully and cooperatively the doctrinal congregation operates.

“I think we work in a more collegial fashion than in most instances in the church,” Cardinal Levada told Catholic News Service in a wide-ranging interview in mid-March.

“We take into account all the relevant data before articulating our position,” he said. That means thorough reflection and discussion by groups of theological peers before decisions, reprimands or decrees are handed down, he said.

Cardinal Levada, 70, is the first U.S. prelate to head the doctrinal congregation, which is the oldest of the Vatican’s nine congregations and considered primary in responsibility and influence.

The study of Father Sobrino’s works began well before Cardinal Levada arrived at his position, at a time when Cardinal Joseph Ratzinger – now Pope Benedict XVI – was at the helm of the doctrinal congregation.

On March 15, the congregation said some of Father Sobrino’s writings on the nature of Christ were “erroneous or dangerous” and conflicted with church doctrine.

Cardinal Levada said Father Sobrino was given ample opportunity to consider and respond to the critical review.

“The congregation works very slowly in reviewing a theologian’s work, perhaps too slowly in many respects. It attempts to guarantee fairness for the theologian and put aside any idea that somebody is being railroaded,” the cardinal said.

Theologians under review can have their own theological or canonical adviser. Any critique is based not on anonymous accusations but on the theologian’s published works or public statements.

“Often the question is whether a theologian really believes something that is contrary to the faith, or whether he has expressed his thinking badly or partially,” Cardinal Levada said.

“We don’t publicize this process, because in some instances, I say gratefully, we have not had to come to a public notification. If a theologian acknowledges an error or a too-partial presentation and agrees to make an adequate correction in a subsequent book or article, then we’ll consider the matter closed,” he said.

So far, the cardinal said, that has not been the case with Father Sobrino, and so a public warning was necessary. Although Father Sobrino is 69 and currently not teaching, he remains an influential voice in Catholic theology, Cardinal Levada said.

Vigilance over theological publications is only one of many tasks carried out by the doctrinal congregation, which is responsible for safeguarding and promoting doctrine on faith and morals throughout the Catholic world.
That can touch upon a wide spectrum of topics: same-sex marriage, Marian apparitions, women’s ordination, healing prayers, religious pluralism and many, many others.

With a permanent staff of only 36 people, the congregation is limited in what it can tackle at any one time. That’s one reason documents and decisions are not churned out quickly, but take years to develop.

Currently, for example, the congregation is re-examining bioethics developments with an eye to updating its landmark 1987 instruction, “Donum Vitae” (“The Gift of Life”).

“The principles of ‘Donum Vitae’ remain entirely valid, but there are new questions posed by technology and research – in stem cells, to give just one example,” Cardinal Levada said.

A separate question under study by the congregation is natural law, the term the church uses to describe the set of universal ethical or moral truths that form a common ground for all religious faiths and political systems.

Rather than embark on a new document, the congregation wrote to Catholic universities around the world asking them to focus their academic resources on the question of natural law, by sponsoring symposiums and other events.
The idea was to get centers of Catholic learning involved in promoting a concept that is essential to understanding the church’s position on issues like abortion, marriage, human rights and religious violence.

In dealing with fundamental issues of faith, Cardinal Levada said, the congregation must look sometimes at questions related to evangelization in the modern world: Is announcing the Gospel of Christ somehow an imposition on people?

Cardinal Levada said the doctrinal congregation has to set its priorities by evaluating the queries it receives from bishops, theologians, theological faculties or even individuals.

When the questions reach a critical mass, then a systematic response may be issued. The form can vary, from full-fledged instructions or declarations to less formal notes, commentaries, letters, responses, suggestions or observations.

Pope Benedict, of course, can help set the agenda. Cardinal Levada meets with the pope almost every week, and said he finds the pontiff “keenly interested” in details of the congregation’s affairs. But the pope also respects the autonomy of the prefect, he said.

“He’s very interested in these things, but he does not try to micromanage in any sense. I take into consideration any indications he wants to give. But it’s not like I’m looking over my shoulder,” the cardinal said.

Adding greatly to the workload is that Cardinal Levada’s congregation is charged with reviewing the documents of any Roman Curia agency that touch upon doctrine. That can mean studies lasting weeks or months.

More than other Vatican agencies, the doctrinal congregation relies heavily on its 31 consultors, a group of theologians or canon law experts who meet once or twice a month to deal with specific questions. Often one or two sessions are needed for everyone to speak, and they end up being a theological “minicourse” in whatever is under study, Cardinal Levada said.

“The point is, the congregation tries to have the best theological expertise and reaches out to specialists, whoever they may be. The work here is not all done by in-house generalists,” the cardinal said.

The consultors’ discussions are written up in a report, which goes to the monthly meeting of the congregation’s cardinal and bishop members. In practice, it’s not always easy for distant members to make the trip to Rome for a meeting that lasts only a few hours.

Once every two years, the congregation’s full membership meets in a weeklong plenary session to set long-term goals and hear progress reports.

Since 2001, by decision of Pope John Paul II, the doctrinal congregation has been responsible for the handling of cases of clerical sex abuse against minors. That created an enormous amount of new work, and the congregation’s disciplinary section had to be expanded.

Cardinal Levada said many cases are still being processed, but the number is finally tapering off.

“I think you could say the crisis dimensions (of the case load), caused by the situation in the United States, are behind us,” he said.

A native of California, Cardinal Levada was archbishop of San Francisco for 10 years before the pope called him to Rome. He had one big advantage coming into the job: He had worked on the staff of the doctrinal congregation in 1976-82 and had been a bishop-member since 2000.

The cardinal studied with a language tutor after returning to Rome and found that his Italian came back nicely. That’s important, he said, because most of the routine business is handled in Italian.

In contrast with his days as a diocesan bishop, Cardinal Levada said he doesn’t get out much for pastoral work in Rome.

“Especially in my first year, I had to be careful that I didn’t rob the time needed to deal with the enormous amount of documentation this congregation handles,” he said.

But the job is not a lonely one, the cardinal said. He meets with the congregation’s other officials at least once a week, with a continual stream of others who bring questions, and with the frequent study sessions of advising theologians.

“I certainly don’t feel that I’m sitting on a lonely mountaintop having to issue edicts all by myself,” he said.