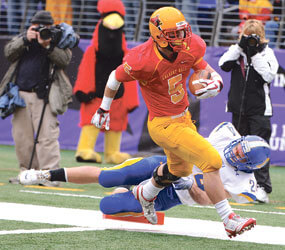 The biggest game of the year now has competition in the minds of Calvert Hall football players and coaches.

Six days before the Cardinals are slated to play Loyola Blakefield in the 92nd edition of the Turkey Bowl at Towson University’s Johnny Unitas Stadium Nov. 24, they will play in the first-ever Maryland Interscholastic Athletic Association A Conference championship game Nov. 18 against Gilman, Baltimore’s top-ranked team.

The rivals typically have several weeks to prepare for the Turkey Bowl, but Calvert Hall’s run in the MIAA playoffs is throwing something new in the mix.

“It’s certainly a different dynamic, that’s for sure,” Calvert Hall coach Donald Davis said. “We’ve never had a situation where we’ve had less than a week to prepare for the Turkey Bowl. We’re really dealing with something new.”

Gilman gave Calvert Hall (9-1) its only loss Oct. 7, thanks to a last-minute, 97-yard punt return for a touchdown by Cyrus Jones. Davis said that if his team wins the rematch, at Unitas Stadium, the challenge will be to keep his team level-headed going into the Turkey Bowl. If the Cardinals lose, Davis has to figure a way to rebuild their confidence.

Calvert Hall running back C.J. Williams said his team won’t back down from anyone.

“It’s going to be a tough challenge, but we’re definitely up for the task,” Williams said. “You’ve just got to think Gilman. This is the championship game. After that game, we’ll have 24 hours to live it up and turn our attention to Loyola.”

Calvert Hall, the defending A Conference champion, has won the last two editions of the Turkey Bowl handily, but Loyola (4-5 this season) holds a 45-38-8 advantage in the series. The game is among the most revered high school football rivalries in the country.

M&T Bank Stadium, home of the Turkey Bowl since the late 1990s, can’t be used this year because the Baltimore Ravens meet the San Francisco 49ers there Thanksgiving night. The venue might have changed, but the passion and tradition will remain, promised Loyola coach Brian Abbott.

“You’re getting an opportunity to play against the toughest competition and your biggest rival,” Abbott said.

“With Towson, there will be more of an electric feeling,” said Deemer Class, a Loyola wide receiver.

Abbott has been able to use the last few weeks to scout Calvert Hall. While there have been struggles, Abbott calls his team “a hard-working, resilient group,” which has experienced a “roller coaster year.”

“He looks like a leader out there on film,” Abbott said. “He plays with a lot of passion.”

Abbott and his players are on the same page about what happened in the previous two Turkey Bowls.

“We need to eliminate mistakes,” senior Jordan Horne said. “We made a lot of mistakes. But, a lot of us have experience playing in the Turkey Bowl.”

To read more about the remarkable turnaround Coach Don Davis and Calvert Hall have made during the last three years, visit CatholicReview.org/palmerblog.