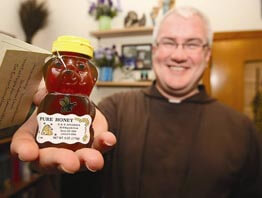 When Joseph DeSilva of Park Heights has a sore throat, he mixes his tea with a little honey purchased at St. Ambrose and blessed by his pastor.

What makes the home remedy sweeter for the South American native is the knowledge that his home parish is named after the patron saint of beekeepers and honey makers and the profits from the honey gives support to the church.

“I’ve often prayed to St. Ambrose for guidance,” Mr. DeSilva said with a thick Guyana accent. “The fact that the honey I bought was blessed at St. Ambrose by Father Paul (Zaborowski, O.F.M., Cap.) gives it special meaning to me…, and I think it makes the food taste better.”

Though the parish earns little revenue from selling the honey it imports monthly from a Dover, Del. beekeeper, Father Zaborowski says the main reason he began selling the sweet bee nectar two years ago was to promote pride in the church and get people buzzing about the St. Ambrose legend.

Legend suggests that when he was an infant a swarm of bees settled on his face while he was lying in his cradle and left behind nary a sting, but a drop of honey. This prompted his father to declare it was a sign that his son would become a sweet-tongued preacher of great significance.

Bees and a beehive are traditionally set at St. Ambrose’s feet in statues made in his honor, like the one Father Zaborowski viewed while traveling in Milan several years ago, and a plaque made of beeswax that a nun brought back from Germany as a gift for the Park Heights parish pastor.

When the priest arrived at St. Ambrose nearly three years ago, he began to research the life of the saint for which the parish was named, and found the bee story fascinating.

A few months later it dawned on him it would be a great idea to sell at the church honey naturally harvested by a beekeeper as a way of evangelizing and to promote a positive image for the parish.

Notices about the $3 jars of honey regularly ran in the parish bulletin and displays were set up at the church’s information table, sparking the interest of both parishioners and members of the neighborhood, who regularly purchase 50 to 100 bear-shaped containers each month, Father Zaborowski said.

Among other uses, the organic honey is incorporated in cookie recipes, on cereal and in tea. Father Zaborowski said he loves a little on a saltine cracker.

“I wasn’t surprised it caught on,” he said. “I had a feeling people would embrace the honey, because the whole idea of it is fun and it’s a great story.”

Each jar comes attached with a card advertising the parish and retelling the legend of St. Ambrose.

Since parishioners often buy the honey as a gift for friends and relatives, it promotes the church and has the potential of attracting new worshippers to his growing flock, Father Zaborowski said.

The honey is delivered to St. Ambrose personally each month by Dover Beekeeper Warren W. Seaver, owner of S&S Apiaries.

Having no other delivers in the Baltimore area, Mr. Seaver stops at the church on his way to visit his son, who lives in Frederick.

Though the sweet nectar of his 250 colonies (each can have as many as 16,000 bees) are enjoyed by the St. Ambrose community, Mr. Seaver says the honey is only a byproduct the primary focus of his business – which provides fruit and vegetable farmers on the Delmarva Peninsula with pollination.

“Without the honey bee pollination, fruits and vegetables would not have ‘a good set’ enabling the plants to produce a quality as well as quantity of fruits or vegetables,” he said.

Though people buy the honey throughout the year, fall and winter tend to be the season St. Ambrose sells the most, Father Zaborowski said.

“We’re in the midst of cold and flu season,” Father Zaborowski said. “The honey really helps sooth your throat.”