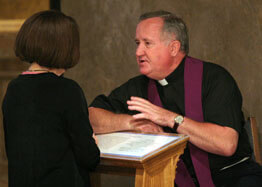 WASHINGTON – Use of the sacrament of penance makes each Catholic “an evangelist for the forgiveness of Christ and a witness to God’s wondrous mercy,” said Archbishop Donald W. Wuerl in his first pastoral letter as head of the Washington Archdiocese.

“When we face daily frustrations and struggle to be good, we need to recall the teaching of the church that we have the power to triumph over sin because we have God’s grace within us,” he said in the letter, dated Jan. 8 and made public Jan. 25.

The letter was issued for the season of Lent and was titled “God’s Mercy and the Sacrament of Penance.” Lent begins on Ash Wednesday, which this year is Feb. 21. Easter is April 8.

The grace of the sacrament allows people “to get back up after each fall … and allows us to continue our journey to God,” wrote Archbishop Wuerl.

Coinciding with the pastoral letter is a pastoral initiative encouraging archdiocesan Catholics to receive the sacrament of reconciliation during Lent. Every parish church is to make confession available every Wednesday of Lent, starting Feb. 28, from 7 p.m. to 8:30 p.m.

Penances services were being scheduled in deaneries throughout the archdiocese. Starting Jan. 29, Archbishop Wuerl planned to join local priests in hearing confessions during the services at about a dozen churches.

The pastoral initiative, called “The Light Is On for You,” includes a user-friendly brochure for distribution which offers a guide on how to go to confession and a wallet-size card with the Act of Contrition on it. The archdiocese planned to promote the initiative in ads on buses and subway cars.

The sacrament of reconciliation, Archbishop Wuerl said in the pastoral letter, “is the story of God’s love that never turns away from us. It endures even our shortsightedness and selfishness. Like the father in the parable of the prodigal son, God waits, watches and hopes for our return every time we walk away.”

In a Jan. 18 interview with the Catholic Standard, the archdiocesan newspaper, Archbishop Wuerl said he chose “God’s Mercy and the Sacrament of Penance” as the topic for his pastoral letter because “Lent is a natural time for the church to focus on God’s mercy.”

“In a way, confession has become a forgotten sacrament. There are a lot of people who aren’t as familiar with it as they ought to be or would like to be,” he said.

A goal of the pastoral letter “is to remind people of God’s mercy and how readily available to us it is, and how easily we can get up from a fall,” the archbishop said. “In the Way of the Cross, we have the example of Jesus falling under the weight of our sins and getting up. We fall under the weight of our sins, and he’s there to help us back up.”

Regarding “The Light Is On for You” pastoral initiative, the archbishop said that during Lent a light of welcome will be left on in each church window.

“Leaving a light on in the window is always an invitation, a sign of welcome,” he said.

One reason the use of the sacrament of penance has fallen off, Archbishop Wuerl said, is “there’s so much in our culture that says, ‘Whatever happens can’t be our fault. It must be all right or somebody else’s fault.’ We live in a culture that tries to justify whatever individuals do.

“People say, ‘It can’t be a sin, because I like doing this.’ We tend as a culture to justify what we’re doing, rather than examine it in the light of the Gospels,” he said.

To people who have not been to confession in awhile, Archbishop Wuerl said his message is: “Why carry all that excess baggage when you don’t have to? Why make your way through life without Christ’s help when he’s standing there, waiting to help you?”

Archbishop Wuerl said he has received God’s grace from the sacrament, both as a penitent and as a priest.

In penance, God’s grace is experienced both by the person whose sins are forgiven, and by the priest administering the sacrament, Archbishop Wuerl said.

That life-giving aspect of the sacrament also extends to people who partake in it, even though they might not have a serious sin on their souls, the archbishop said.

“The sacrament is always beneficial,” he said.

“Someone once described it as washing away all the accumulated grime of daily life. Every person accumulates grime. Every one of us falls along the way. Nobody but Christ and his mother can say they’re perfect,” the archbishop said.