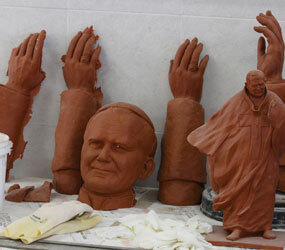 VATICAN CITY – From the outside, they looked like large blocks of red clay, but hidden within were the contours of Pope John Paul II, waiting for 660 pounds of molten bronze to be poured inside and to become a statue.

The clay and lime molds of the soon-to-be blessed were waiting to be baked for four days in a 1,500-degree, methane-powered oven in a foundry run by Domus Dei – a company owned by the Sister Disciples of the Divine Master.

The bronze would be melted at 2,200 degrees and poured into the casts from large metal crucibles in a technique called lost-wax casting.

The May 1 beatification of the late pope inspired a number of Italian towns and cities to dedicate a public square to the much-loved pontiff and, like any proper Italian square, it needs a statue.

“We have five statues and two busts” of Pope John Paul on order because “many piazzas are being dedicated to him,” said Sister Mariella Mascitelli, a member of the Sister Disciples of the Divine Master and an architect with the artisan company.

The religious order, which is an institute of the Pauline family, has been running Domus Dei since 2006.

Located near the Alban hills south of Rome, it is the world’s only all-in-one workshop, laboratory and consultancy agency for the building, furnishing and decoration of churches and places of prayer, said the company’s art director, Sister Maria Elisa Rossetti.

With more than 30 artisans and specialists in architecture, mosaics, stained glass, sculpture and liturgical objects and furnishings under one roof, “We can do a complete church from the building itself to the chalice on the altar,” Sister Maria Elisa told Catholic News Service.

As art director, the Italian nun keeps her eye on the myriad projects under way.

She chatted with an artisan as he soldered polished brass pieces together to make a music stand for a parish in the United States. She asked two other workers, who were grinding down the weld of an enormous bronze Risen Christ, how the work was progressing. And later she politely excused herself from inspecting a resin bas relief of the Virgin Mary when her Blackberry buzzed.

Most of the artisans are laymen and laywomen, but a handful are religious sisters.

Sister Agar Loche is an artist from Poland who designs glass windows, mosaics and furnishings.

She was piecing together sections of hand-cut stained glass for a large window that will depict Jesus and Sts. Peter and Paul. A typical stained-glass window could have anywhere from 200 to 400 individual pieces of colored and painted glass, she said.

Sister Maria Elisa pointed to a waist-high, flower-like metal candelabra, saying, “Another nun designed and modeled by hand the clay” used to make the molds.

The workshops were busy in early April, especially in the restoration department.

A delicate 18-century wooden sculpture of a crucified Jesus rested on a bed of soft polystyrene.

The restorer, Federica Tartarini, had repaired the cracked torso, arms and ankles and was gently daubing the body with cleaning solvents to remove the last of the dirt and grime.

The statue, which came for repair and restoration from a church in Anzio, “needs to be ready by Palm Sunday in time for the procession,” she said.

The sisters see their work of promoting sacred art as being one of the new roads of evangelization and dialogue that are based on “a pastoral of beauty.”

By creating art that is inspired by faith, the congregation contributes to modern culture and revives a sense of real beauty, which has often been “disfigured by egoism, materialism, consumerism and religious indifference,” the congregation’s superior general, Sister Regina Cesarato, wrote on the congregation’s website.

The sisters’ vocation includes perpetual adoration, which inspires all of their artistic projects from creating a tiny candleholder to a soaring church tower, Sister Mariella said.

“You can tell the difference between an artistic work made by a big artist who doesn’t know who Jesus Christ is and tries to interpret Jesus in his masterpiece, and a person who really lives the word of God. There is a big difference,” she said.

Creating beauty in sacred art requires staying connected to Jesus through prayer, the Scriptures and the sacraments, especially the Eucharist, she said.

By staying close to Christ, an artist receives “a little light every day and if we follow that light” and not get distracted from the truth by flashy fashions and fads, the artist will find a way to create a work that connects people with God and others, she said.

“That’s why when people pray in an environment that is really designed from prayer, they can find their spiritual connection with the Lord and with the world,” she said.

She said, “Everything that is beautiful helps the spirit find the Lord, which is beauty.”