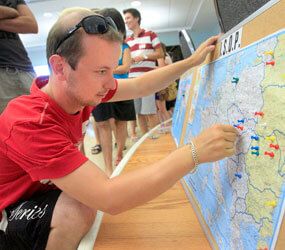 OCEAN CITY – A home-cooked meal was just what Monika Burzynska needed after her first two weeks in the United States.

“I’ve been working since I got here,” said Burzynska, 22, who arrived in Ocean City June 15 from Poland, where she just finished her second year of college. “I have to pay for where I’m staying first and then comes food.

“So I eat a lot of frozen (food). It’s the first time in my life I have to manage food, accommodations. For the first time, it’s just me,” she said.

Burzynska was one of about 500 students who came to Holy Savior Church on a recent summer evening for a free dinner provided by the International Student Outreach Program, an ecumenical ministry that began at Holy Savior in 2002 and has since spread to include other churches.

Church volunteers work throughout the summer to help the thousands of international students who travel to Delaware and Maryland’s Eastern Shore each summer to work at restaurants, boardwalk shops, hotels, recreation facilities and elsewhere.

Before the dinner, Anne Marie Conestabile, who heads the program, joined international student volunteers and more than 20 parishioners from 12 participating churches to put the finishing touches on the hall’s decorations.

Conestabile said hundreds of pounds of food had been prepared for the first of 25 dinners scheduled at different churches throughout the summer.

“It’s a blessing to meet so many people,” she added.

The program has helped more than 75,000 students since it began, she said.

It started at Holy Savior in 2002 when Conestabile and Father John Klevence, then the pastor, responded to seven students from Poland who came to the parish looking for help.

Wilmington’s bishop at the time, the late Bishop Michael A. Saltarelli, wanted to meet these students, said Conestabile, 60, then the parish’s youth minister.

After the bishop invited them to dinner and heard their stories, “he encouraged me to continue the ministry,” she said. “And so the ball started rolling from there.”

In addition to dinner, the ministry had donated items to give the students, including shampoo and other toiletries, books, clothes, shoes and kitchen items.

“Most students are earning minimum wage ($7.25) to $9 an hour, so we try to help in every way possible,” Conestabile told The Dialog, newspaper of the Wilmington Diocese, which includes several Maryland counties.

Among those enjoying their first visits to the United States was Egle Marcinkeviciute, 21, who came to the dinner straight from her job at a takeout grill on the boardwalk.

Marcinkeviciute, a Catholic from Lithuania who came to Ocean City with several friends three weeks earlier, said she wouldn’t miss the dinner.

“I can meet more people there, more friends. I love it here,” she said. “It’s great being near the ocean. I saw dolphins for the very first time when I got here.”

Marcinkeviciute participates in Catholic youth ministry in her home diocese in Lithuania, a ministry that began in 2004 after a Lithuanian priest who was visiting Holy Savior from the Diocese of Vilkaviskis invited Father Klevence and Conestabile to a conference in his country to teach catechists how to become effective youth ministers.

About 30 miles north of Ocean City, at St. Edmond Parish in Rehoboth Beach, religious education director Jim Walsh has helped organize the extension of Conestabile’s outreach program for the past four years.

The Lewes-Rehoboth Association of Churches, an ecumenical group that includes St. Edmond, St. Jude Parish in Lewes and 18 other churches, hosts a dinner for international students every Wednesday.

“The volunteers and I understand that it’s a while before these kids can get their first paycheck. We give them a great meal so it’s one night they won’t have to worry about it,” said Walsh.

“Coming to the U.S. is such a once-in-a-lifetime experience for the students,” he said. “Our volunteers put in hundreds of service hours throughout the summer to show students fellowship. It’s what our church is all about. We want to do everything we can to make them welcome. We want them to feel at home.”

Conestabile said many of the students are pleasantly surprised by the camaraderie that exists among Ocean City residents and at the church.

“One young gentleman asked me, ‘Anne Marie, why is there a building attached to your church when you just go right home after Mass?’“ she said.

He said Massgoers at his home parish in Lithuania didn’t talk to one another much, and the concept of a social hall was completely unfamiliar.

Conestabile said her explanation was simple. “It’s where a parish becomes a family.”