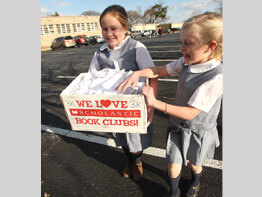 It’s true that recycling isn’t new, but for student council officers at Immaculate Heart of Mary School the idea of it has been recycled into a new passion – and one they want to leave behind.

“It’s an ongoing process,” said eighth-grader Aaron Thomas, president of the student council who facilitates its meetings once a week. “We want to leave our imprint.”

The group’s main focus is to become a Maryland Green School by 2010 – and remain green.

After the Baynesville school completes three major areas of focus in a two-year process, an application will be submitted to Baltimore County to seek the Green School Award as part of The Maryland Association for Environmental and Outdoor Education. Recertification is required every four years.

“This is a big thing,” said Aaron. “The environment’s going down fast.”

While interacting with the parish and the community, whose members have commented that the school grounds look cleaner, the entire school body is “caring for creation,” one of the seven principles of Catholic social teaching.

“Even 4-year-olds can understand this,” said Amy Belz, principal. “Our goal is to involve everyone.”

Teachers Terri Archibald, Melissa Martin and Gail Cernick are nudging the process in the classroom by linking the students’ efforts to the science curriculum.

“Recycling’s not new, but I found it’s contagious,” said Mrs. Belz. “It’s teachable. But the kids have the ideas.”

She has implemented a paperless office, ridding it of the plethora of sent-home forms, memos, news, notices, calendars, hot lunch schedules, sports schedules and upcoming events – all of which are now posted on the school’s Web site.

“E-mail blasting is now my absolute favorite thing,” said the principal, who took over last July and has found the green project a great way to get to know her students.

The paperless method has also helped to reduce the amount of paper inadvertently dropped on school grounds by the students.

Other student council members include Claire Abell, vice president; Neil Conway, treasurer; Sam Tumminello, secretary; and eighth-grade homeroom reps Emily Candler, Andrew Hermann and Jillian Baker, who said they’ll be back after graduation to see how their efforts have sustained.

“We just want to help the environment and do our part,” said Emily, “so the world can be a better place. It starts here.”