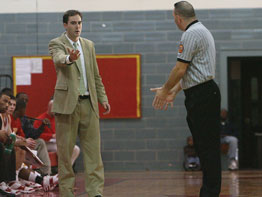 As John Bauersfeld looks back on his first season as head coach of the Calvert Hall College High School Cardinals varsity basketball program, he feels good about the competitive manner in which his team played this season.

It was clear to Bauersfeld that stepping into the “head coach” role at the Towson school, behind icon-coach Mark Amatucci who stepped down last spring, was going to be a challenge – especially with such a young squad to work with.

The Cards would be starting three sophomores, and so Bauersfeld knew the road would be a little bumpy. Yet the resilient Cards went 15-17 on the season and 7-11 in the MIAA A Conference. Playing against some of the greatest teams in the area was a constant challenge for the young Cardinals.

Coach Bauersfeld will now use their age to his advantage in the 2008-2009 season as the team will look to two rising juniors, 6-foot-8-inch Jonathan Graham and point guard Kyle Wise.

A 1994 Calvert Hall grad and former hoopster, Bauersfeld played Division III ball at Gettysburg College and has now returned to The Hall as a business management and computer applications teacher. He coached the junior varsity program and assisted Mark Amatucci for two seasons before taking the reins, a move strongly supported by Amatucci.

Highlights of Calvert Hall’s 2007-2008 season include the buzzer-beater victory on the home court of Loyola Blakefield, Towson, when sixth-man Shawn Holmes drilled a three-pointer as time expired to lift the Cards to a 48-45 win.

As the season wound down, the Cardinals entered their final game – a Baltimore Catholic League tournament game against Towson Catholic High School. Bauersfeld commented that he was most proud of his team for staying with the Owls for three-plus quarters before the Owls pulled away for the win.

When asked about “lessons learned” on the season, Coach Bauersfeld said, “Preparation is the key. I can do much better next season and I will.”

The Cards will compete in a summer league at McDonogh School along with a summer weight-lifting program.

The Cardinals’ junior varsity program won its league and finished 27-3 on the year.