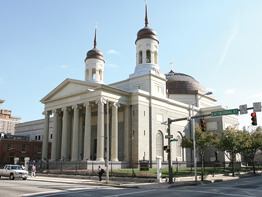 Ruth Harrison of Churchville has visited famous churches throughout Europe and found her January tour of the Basilica of the National Shrine of the Assumption of the Blessed Virgin Mary to be among the best – made especially unique by the historical knowledge imparted by volunteer docent Frank Twardzik.

The retired radiologist from Howard County, and his wife Barbara Twardzik, are among 50 volunteers who give guided tours of the newly restored Baltimore landmark and church leaders are ready to recruit additional men and women to join the Basilica’s legion of docents.

“We’ve got our class of 2006 in place and they are doing an exceptional job, but the demand for tours has been very high,” said Mark Potter, executive director of the Basilica of the Assumption Historic Trust. “So, we’re ready to start the class of 2007.”

In the next few weeks, the trust will begin to run notices in parish bulletins throughout the Baltimore Archdiocese and organizers hope to begin training interested volunteers this winter, to have them ready for solo tours by spring, Mr. Potter said.

The response to the reopening of the nation’s first Catholic cathedral after a two-year, $32 million restoration project has been tremendous, with more than 36,000 visitors since the middle of November, he said. On Jan. 20, a group of 190 people from St. Alphonsus Rodriguez, Woodstock, toured the church for the first time.

“I would love to have a total of 100 volunteers,” Mr. Potter said. “That would allow us to expand our programs and still accommodate everyone who would like to come in and have a tour.”

Dr. Twardzik and his wife, a retired attorney, answered the call for volunteer docents last year after reading a notice in the bulletin of their parish, St. Louis, Clarksville.

After several hours of training and going over the historical reading material provided by the Basilica, the Glenwood residents were ready to give tours shortly after the church reopened in November.

“It’s been a great experience,” Ms. Twardzik said. “I was a little nervous before the tours started, but so far so good. There have been some funny questions along the way, mostly from the younger people who want to know if there are any secret passage ways.”

Dr. Twardzik said he has only been stumped a few times by inquisitive visitors – who come from all over the world – requiring him to do a little more research on the building, its architect and the famous people who have passed through its corridors during the past 200 years.

Ms. Harrison and her daughter, Leslie Spencer of Morrisville, Pa., told Dr. Twardzik his informative 45-minute tour made them appreciate the beauty of the building even more than when they first set foot inside of the church and were dumbfounded by the “heavenly light” streaming from the dome.

“The stories about the renovations were fascinating,” Ms. Harrison said. “I saw a special on television about the renovations, but your tour really elaborated on the history and I can appreciate the beauty of this place more now with the knowledge you have given us.”
Free guided tours are given Monday through Saturday at 9 a.m., 11 a.m. and 1 p.m., and noon on Sunday. Historic Trust officials also schedule private group tours throughout the week, Mr. Potter said.

It will be a little easier to tutor the new recruits this winter, because docents-in-training will have an opportunity to be teamed up with experienced tour guides as they prepare to take groups through the Basilica on their own, he said.

Though 100 volunteers may appear to be an enormous army of tour guides and gift-shop workers, Mr. Potter said it’s an appropriate number considering they are only asking them to give two to three tours a month.

“The volunteers we have now have been so important to us,” he said. “I can’t imagine the Basilica operating without them. They’ve been so motivated and excited and they’ve really taken the time to learn about the history of the Basilica. We’re very much looking forward to the future and getting our new group in place.”