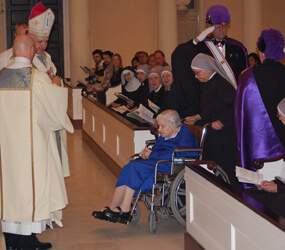 The Archdiocese of Baltimore came together for a Mass of Thanksgiving in honor of the canonization of St. Jeanne Jugan Nov. 1.

It came three weeks after the foundress of the Little Sisters of the Poor was canonized in Rome, which was precisely the point.

“A canonization in the church is a celebration, and you can never do too much celebrating,” said Mother Loraine Marie Clare, provincial superior of the Little Sisters of the Poor. “You want to share your joy, and just share the happiness of being Catholic and serving God’s people.”

Those ideals were apparent at the Basilica of the National Shrine of the Assumption of the Blessed Virgin Mary in Baltimore, where Archbishop Edwin F. O’Brien was the principal celebrant.

The Knights of Columbus presented an honor guard. The Little Sisters who serve at St. Martin’s Home for the Aged in Catonsville accompanied some of those they care for, in wheelchairs.

Also acknowledged were members of the All Saints’ Sisters of the Poor, who in September came into communion with the church.

Like Mother Loraine, Archbishop O’Brien had been in Rome for the canonization of St. Jeanne Jugan and four other saints Oct. 11, when he was among the concelebrants with Pope Benedict XVI.

On All Saints Day, his homily touched on the power of the saints.

“They (the saints) help us,” Archbishop O’Brien said, “by the light of their heroic, saintly example shining into our world, encouraging and prompting us to persevering trust in God’s love and mercy. Most of all they help us by interceding for us in powerful prayer sure to be heard, especially when we call upon them in faith.”

He referenced the heritage of the Little Sisters, both in his hometown, where he recalled observing their presence entering Yankee Stadium as a boy, and here.

“In 1864, the first Little Sisters of the Poor were welcomed by the seventh bishop of Baltimore, Martin John Spalding,” Archbishop O’Brien said. “To this very day, the spiritual daughters of St. Jeanne Jugan have been beloved laborers in this vineyard.

“To visit St. Martin’s Home for the Aged or any of their 29 homes across the United States is to experience in a deeply moving way, in the words of Pope Benedict, ‘joyful service … carried out with gentleness and humility of heart.’ Daily, our Little Sisters knock on doors begging for food and other gifts on behalf of their residents.”

The celebration for the Little Sisters of the Poor was to continue with a Nov. 4 gala at Martin’s West honoring Orioles great Brooks Robinson, and his wife, Connie.