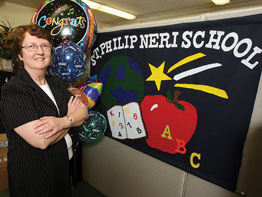 No red carpet led to the Embassy banquet room of glittery Martin’s West, nor were there zoom lenses slung around the necks of paparazzi as they strained to see who stepped out of the line of limos. Neither television cameras nor famous actors were anywhere in sight.

Yet even without the diamond-clad glitz and plastic glamour of a typical Academy Awards evening, the significance behind the tributes to Catholic school teachers April 10 meant more than any gold Oscar.

At the 17th annual Teachers Awards Banquet sponsored by the Division of Catholic Schools of the Archdiocese of Baltimore, the teachers didn’t need a red carpet – typically they bring noisemakers, confetti and balloons.

“It’s strictly for the schools’ staff to kick back, have fun and enjoy the camaraderie,” said Janis M. Peck, director of Catholic Schools marketing and advancement, “a great opportunity for all of our schools to get together and celebrate their accomplishments as well as our Catholic schools’ community as a whole. It’s a super time for everyone.”

And the winner is Teresa Baker, 13-year principal of St. Philip Neri School, Linthicum. Approximately 700 people applauded for the awardee of the Doris Musil Award Citation as she rose to accept the honor and a $500 check.

This award honors the late assistant superintendent Doris Musil, an educator who exemplified vision, integrity, and commitment to Catholic education.

“Her example inspired all who were fortunate enough to know and work with her,” read Dr. Ronald J. Valenti, superintendent of Catholic schools, during the introduction of the award. “Gentle in manner and empathetic in approach, Doris advocated unwaveringly for children.”

Knowing the large pool of people nominated, Miss Baker said it was “a big surprise” when her name was announced. “When I saw the list I thought ‘no’ – I was obviously very surprised considering everyone in the group.”

Miss Baker and Ms. Musil were comrades and ministers together in the school. “I knew Doris,” said Miss Baker. “She lived across from our school and used to stop in for coffee; it was that kind of a relationship and I am really very honored to receive the award in her name.”

Thirty-seven awards were presented for teaching excellence and many teachers were recognized for milestone lengths of service: 10, 20, 25, 30, 40, 50, and 60 years. Topping the list was Sister Georgine Smith, O.S.F., Mother Mary Lange Catholic School, Baltimore.

The celebration is a time for the “archdiocese to raise up our teachers to give them the recognition that is so justifiably theirs,” he said, “a celebration of time, gifts, and talent. They’ve all said yes to this ministry.”