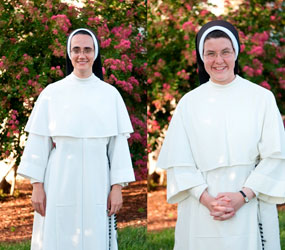 Katy Zeitler can pinpoint her conversion to one precise moment. During a high school trip to Paris, the daughter of an atheist mother and agnostic father attended a Mass inside a small church. As she observed everyone kneeling after receiving Communion, Zeitler felt a French women tug on her arm toward the ground.

“When my knees hit the kneeler, I surrendered,” said Zeitler, who had been reading about the Catholic faith and talking with a Catholic teacher for months before traveling to Europe. “I had been seeking the truth and I found it. I knew God loved me.”

Zeitler was baptized and received into the faith.

Aubrey Hargadon grew up as a cradle Catholic. Attending Holy Family in Randallstown and then Sacred Heart in Glyndon, she loved her faith. While a student at Mount de Sales Academy in Catonsville, she often prayed in front of the Blessed Sacrament and felt a special connection with Christ.

During World Youth Day in Toronto, Hargadon was deeply moved when Pope John Paul II challenged young people to trust in the Lord.

“He told us that God has a plan for everyone and for us not to be afraid,” Hargadon remembered. “I felt like he was speaking right to me. It gave me such confidence.”

Although Zeitler and Hargadon had different faith journeys, they wound up in the same vocation. This summer, both professed their final vows of poverty, chastity and obedience as Dominican Sisters of St. Cecilia in Nashville – the religious order that sponsors Mount de Sales.

Zeitler is now known as Sister Mary Bethany, while Hargadon’s religious name is Sister Grace Dominic. Both expressed a sense of joy and peace in embracing the religious life.

“It was like my wedding day,” said Sister Grace Dominic, 27. “To finally say yes with all my heart was just lovely. It’s a totally undeserved gift – very joyful and very freeing.”

Sister Mary Bethany, 28, said she feels blessed to be part of the Dominican community.

“It’s a wonderful life,” she said. “The sisters are so good and live such a rich community life.”

“The habit is a tremendous grace,” Sister Mary Bethany said. “It makes people feel open to have conversations with you about God.”

Both women, who described one another as a “vocation buddy,” said prayer is key to discerning one’s vocation.

“Spend time in adoration with our Lord,” Sister Grace Dominic said. “Make the sacraments primary in your life.”

“What he wants of us is going to make us happy,” she said.