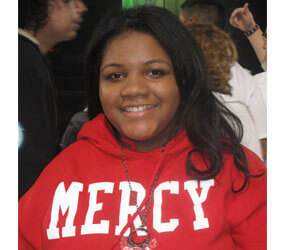 They were saying goodbye to friends they had made during the last few months, particularly during the three-day National Catholic Youth Conference, during which the foursome from the Archdiocese of Baltimore took center stage.

They were “animators” for the conference, teens from across the country chosen to act, sing, present and lead prayer and discussion for 25,000 other people at the conference. All but 2,000 were teens and young adults.

Crone, a parishioner of Our Lady of the Chesapeake in Lake Shore, said, “We bonded so much over the last few days.”

During a Nov. 18 general session, Crone had a duet on stage with Armstead, a parishioner of St. Cecilia in Baltimore and student at Mercy High School.

“It was incredible,” Crone said. “I cannot even describe to you how it is to help 23,000 of my new family in their faith. It’s amazing. That was the most amazing thing I’ve ever done.”

Armstead said she was nervous at first for her duet, but “everybody was just dancing in their seats. It was so heart-warming. I loved it.”

Middleton, also of St. Cecilia parish, teamed with Ensey to lead prayers Nov. 18 during one session.

“For that first split second, my heart dropped,” Middleton confessed. “After that, I said, ‘You know what? Let’s do it. This is awesome. Tom and I felt amazing about all of it.”

“You never get this happiness anywhere else,” Ensey said. “You can’t really produce it. I’ve never done anything like this on a smaller scale.”

D. Scott Miller, director of the Division of Youth and Young Adult Ministry for the archdiocese, talked with the young people after one general session. He got emotional and pumped his fist, touching his chest.

“I am so, so proud,” Miller told them. “I’m so psyched for you guys. Congratulations. You represented Baltimore. You were awesome.”

With that, Crone said, “Aw, group hug!” and they gathered together. Smiles, not tears, were their lasting memory.