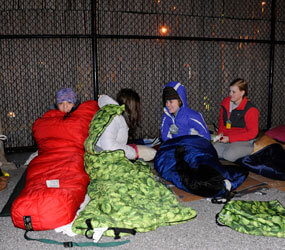 Working with a cardboard box, duct tape and plastic bags, 17-year-old Justine Lago did her best to construct a makeshift shelter similar to those made by Baltimore’s homeless. She soon realized it took more skill than she anticipated.

“It was really hard to figure out,” said the senior at Maryvale Preparatory School in Brooklandville, one of 85 teens who participated in an Oct. 22-23 “Baltimore Sleep-Out for the Homeless” at Our Daily Bread Employment Center.

“You had to equate how rain or wind would affect it and what side of the street to put it on – how big and how tall to make it,” Justine explained. “Overall, the best structures were the smaller ones that wouldn’t get blown over, with a lot of bags on top and a slanted roof so the rain wouldn’t get in.”

The teens didn’t sleep in the box homes, but they did spend a cold Oct. 22 night outside Our Daily Bread to get a small taste of what homeless people struggle with every day. Early the next morning, some were rudely awakened when an outdoor irrigation system unexpectedly went off and drenched them.

“I’m definitely way more thankful and not taking everything I have for granted,” said Justine, a parishioner of Sacred Heart, Glyndon.

Sponsored by Catholic Charities and Jobs, Housing & Recovery Inc. (JHR), the sleep-out gave participants the chance to meet formerly homeless people. Teens learned about the impact of homelessness on children and young adults, and they participated in activities to experience what it’s like to stretch a dollar and provide for a family without steady income.

Participants prepared and served a hot breakfast at JHR’s Housing Resource Center across from Our Daily Bread in the city’s prison district. They also made peanut butter and jelly sandwiches for the hungry.

Kevin, a recovering drug and alcohol addict from Dundalk, shared his experience of losing everything to his addictions.

“By 29, I had drank and drugged myself into a such a quagmire that there was no way out of it,” he said. “I couldn’t stand myself. I know the drugs and alcohol weren’t the problem. The problem was in me. Cocaine and alcohol didn’t knock on my door and say, ‘Let’s hang out.’ I went and got it.”

Other speakers described how they became the victims of abuse or other situations that spiraled out of control and left them with nowhere to live.

“I knew there’s no way to tell if a person is homeless,” said Juanita Moyd, a 17-year-old senior at Cristo Rey Jesuit High School in Baltimore. “Sometimes people think a homeless person is someone who is dirty and has hygiene problems. That’s not what a homeless person necessarily looks like. A person that is homeless today could be you or me tomorrow.”

Kiara McAlister, a 17-year-old senior at Chesapeake High School, was surprised by Baltimore’s homeless statistics. A recent study showed that on any given night in Baltimore, more than 4,000 people are without a home – a 20 percent increase since 2009. Fifty-six percent of the homeless that were surveyed lived in homeless shelters and the other 44 percent lived on the street, in a car, in an abandoned building or elsewhere.

The homeless population in Baltimore included 468 families with children, most of them under age 10. The three top health concerns affecting the population were substance abuse, mental illness and chronic disease.

“It was very eye-opening because you see people on the streets today and no one is really helping them,” Kiara said. “Every homeless person has a reason for being that way.”