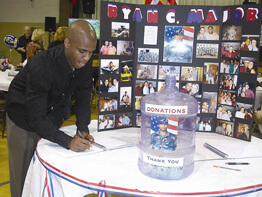 The harsh reality of the war in Iraq smacks Corey Fick in the face every time the Towson resident visits his boyhood friend Ryan Major in the hospital and sees his fellow St. Pius X School alum struggling to heal after a land mine explosion resulted in the amputation of both of his legs.

Not wanting money to be an issue for his childhood friend, Mr. Fick, a 21-year-old St. Pius X, Rodgers Forge parishioner, and some friends held a bull roast at St. Pius Jan. 13 which drew more than 500 people and raised approximately $50,000.

The money will be funneled into the Ryan C. Major Foundation, which will pay for essentials the U.S. Army will not fund, such as a handicap ramp to the entrance of his mother’s Silver Spring home.

Mr. Fick and his friends are also hoping to make the bull roast an annual event, allowing the foundation to help other war veterans who have returned home with life-changing injuries.
“Ryan made a huge sacrifice for his country,” Mr. Fick said. “This is the least we could do for him. He deserves everything we can do for him.”

Army Spc. Ryan Major, 22, a Catholic, wasn’t able to attend the fundraiser that was held in his honor, but his friends were able to take a DVD chronicling the event to his University of Maryland hospital room, so he could view his friends, their parents and former teachers come together in an effort to make life a little easier for him in the future.

“He couldn’t believe all of this fuss was being made for him,” said Michael Major, Ryan’s 21-year-old brother. “At first he said he didn’t want the money. He said it should go to someone else. I think he’s cool with it now. I know all of this has definitely lifted his spirits. He’s ready to face the future now.”
Michael Major, also Catholic, was noticeably moved by the outpouring of support at the function, but said he wasn’t surprised by the generosity of the people involved.

From the time the brothers enrolled in St. Pius X in the early 1990s, they were tenderly embraced by their classmates, he said.

“Ryan was one of those boys who just endeared himself to everyone,” Ms. Smith said. “The parents of his friends felt like they had another son in him.”

Spc. Major joined the Army shortly after his 2003 graduation from Towson High School and was on patrol on an Iraqi street Nov. 9, 2006 when an explosive device blew up, his brother said.
In addition to losing both of his legs in the blast, the Army specialist also sustained two broken arms, the loss of a thumb and two other fingers, and he will require continuing surgeries.

When Mr. Fick and his friends started to plan the foundation fundraiser, they were flabbergasted at the number of local vendors who donated their services, materials and time for the event.

They were equally surprised when just about the entire student body of St. Pius X School paid a total $1,600 to the foundation and when Ravens owner Steve Bisciotti kicked in an additional $5,000.

The Catholic War Veterans of Baltimore have vowed to donate a third of the proceeds of their annual raffle – about $1,000 – to the foundation as long as it’s in existence, said Leo Fenzel, 80, of Catonsville who is a member of the CWV and a World War II veteran.

Sister Valeria Wagner, S.S.N.D., who taught Ryan’s 14-year-old brother Milan Major when he was a second-grader at St. Pius X, was impressed as she saw the scores of donated items for the silent auction, including a firefighter’s helmet signed by actor John Travolta when he filmed ‘Ladder 49’ in Baltimore.

“It’s sad to see these young boys coming home from this war in this kind of shape,” said Sister Valeria, who has since retired from teaching, but continues to volunteer at the school. “I feel terrible that we’re sending more troops over (to Iraq) now. I have serious doubts it will do any good.”

That sentiment was echoed by several of Spc. Majors friends, who said they support the troops, but not the surge of 21,500 additional troops recently ordered by President Bush to Iraq.

“The reality of this war hits me every time I go down to the hospital to see Ryan,” said John Geilfuss, 21, a junior at Towson University, visibly emotional when discussing his longtime friend’s injuries. “We’ve been there too long.”