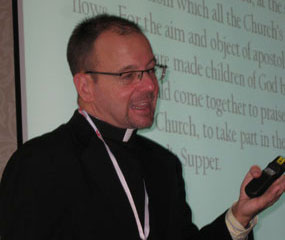 Father Richard B. Hilgartner makes a point about the implementation of changes to the Roman Missla at the Catholic Media Convention in Pittsburgh June 23. (CR Staff/Christopher Gunty)|

Father Richard B. Hilgartner’s jaw dropped the first time he read bits of a draft of the new English translation of the Roman Missal – the book of liturgical prayers that is scheduled to be introduced in parishes Nov. 27.

It was four years ago, and the Baltimore priest had recently been tapped to work for the Washington-based U.S. Conference of Catholic Bishops’ Secretariat for Divine Worship. One of Father Hilgartner’s main responsibilities was to help implement the translation.

“I remember feeling totally overwhelmed,” said Father Hilgartner, a well-respected liturgist who is now director of the Secretariat for Divine Worship. “It was like the rug had been pulled out from under me. I was shocked and thought, ‘What is this going to mean?’ “

The language of the translation was more formal than what Father Hilgartner had known. The grammar was more complicated, and there were more poetic turns of phrase that honed more tightly to the Latin wording and structure from which it was translated.

As he’s studied the new translation, however, Father Hilgartner said his perceptions have “absolutely changed.”

Delving into the text, he’s discovered a richness that invites contemplation. Every word – every punctuation mark – is meant to convey a deeper theological meaning, he said.

Father Hilgartner recently gave a workshop for Baltimore priests at Church of the Immaculate Conception in Towson and was a featured speaker at the Catholic Media Convention in Pittsburgh.

The priest seems hopeful that if Catholics spend time studying the text, they too will grow in their appreciation of it. He knows it won’t be easy. Even some priests are apprehensive about using the new translation.

“We’ve been praying the Mass in the same way for nearly 40 years,” Father Hilgartner told The Catholic Review. “To make changes to something that’s so deeply built into us is going to take some time to get used to it and really appreciate it.”

The original translation of the Roman Missal into English occurred when the Second Vatican Council called for use of the vernacular at Mass. It employed a principle call “dynamic equivalence.” Translators tried to get at the spirit and meaning of the text rather than a word-for-word translation. In the interest of simplicity, phrases were abridged and some prayers were reduced to short, declarative sentences.

‘And with your spirit’

During the Jubilee Year in 2000, Blessed Pope John Paul II promulgated the third edition of the Roman Missal. It included prayers for the celebration of recently canonized saints, more prefaces for eucharistic prayers and other additions. The Latin text of the revision was finished in 2002 and translations have been ongoing since then with an eye toward a more literal rendering of the text.

One of the changes in the new English translation that will be most challenging for many Catholics will be in how they dialogue with clergy.

When the priest or deacon says, “The Lord be with you,” the congregation will respond, “And with your spirit” instead of the deeply engrained, “And also with you.”

During a June 23 workshop in Pittsburgh, Father Hilgartner delved into some of the reasons why “And with your spirit” has been adopted.

The phrase was used in the Book of Ruth and the Book of Chronicles. The angel Gabriel greeted the Blessed Virgin Mary with those words, the priest noted, and St. Paul often signed off his letters that way.

Father Hilgartner, who who came up through St. Pius X Parish in Rodgers Forge, Calvert Hall College High School, Mount St. Mary’s University in Emmitsburg, St. Mary’s Seminary in Roland Park and holds a sacred theology licentiate in sacramental and liturgical theology at the Pontifical Athenaeum of St. Anselm in Rome, pointed out that there’s also an important functional component to the words.

“ ‘The Lord be with you,’ is saying that the Lord is present in this gathering,” the priest explained. “The people’s response back to the priest – ‘and with your spirit’ – is an acknowledgment that the priest’s spirit has been configured and conformed to Christ by virtue of ordination to act as Christ presiding over the assembly.”
When the priest says, ‘The Lord be with you,’ the people’s response is not some kind of “right back at you Father!” as much as it is focused on allowing Christ to work through that priest, Father Hilgartner said.

The liturgical act can take place, Father Hilgartner explained, “because the church is rightly gathered and rightly ordered.”

“It’s a statement of ecclesiology,” he said.

Among other changes Catholics will notice are more biblical references and much more direct quotes from the writings of the saints. Sung responses such as the Gloria and the Sanctus will restore phrases that had been removed from the earlier translation.

Throughout the new translation, words such as “all-powerful” are prominent, as are other reverential phrases in addressing God. They had always been there in the Latin, Father Hilgartner said, but had been removed in the original translation into English.

“The language is self-deprecatory,” Father Hilgartner explained. “It is forcing a stance of humility before God. It’s not that we want people to feel bad. It instills a sense of gratitude and praise – that I don’t deserve what God’s doing for me. Isn’t that the stance of a Christian?”

Father Hilgartner believes the introduction of the new translation can be a time for liturgical renewal.

“The bigger picture has to be helping priests and helping everybody as church really delve deeper into the mysteries that we celebrate,” he said.

Patience will be key, he said.