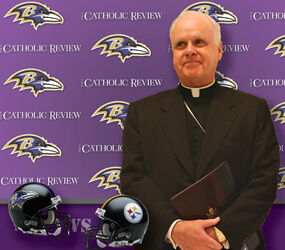 No matter what happens between the Baltimore Ravens and the Pittsburgh Steelers Jan. 15 in the second round of the NFL playoffs, Catholic Charities will come out the winner.

Baltimore’s Archbishop Edwin F. O’Brien and Bishop David A. Zubik, Bishop of Pittsburgh, have a friendly “wager” on the game: the loser will make a personal donation to a charity outreach of the winner’s choosing.

If the Steelers win, Archbishop O’Brien will make a donation to Catholic Charities of Pittsburgh.

“I am looking forward to delivering Bishop Zubik’s check to Our Daily Bread after the Ravens beat the Steelers Saturday and move on to the AFC Championship Game,” Archbishop O’Brien said in a news release. “I have great faith that (Ravens) Coach (John) Harbaugh, a product of Catholic schools, will have his team well-prepared for the game and the Ravens will move one step closer to the Super Bowl!”

“Given that I would find it most difficult to don a Ravens jersey, all the more reason for me to ask Steeler fans to pray for a convincing victory,” Bishop Zubik said. “Otherwise I will need you to stand with me when I wear the Ravens’ purple and black with a frown on my face.”
Baltimore Catholic Charities Executive Director Bill McCarthy called it “great news” to know that a Ravens’ victory will help feed hungry Baltimoreans.
“We are wishing the entire Ravens team, including Ravens’ owner and Catholic Charities Board Member Steve Bisciotti, the best of luck on Saturday when they beat the Steelers,” McCarthy said.