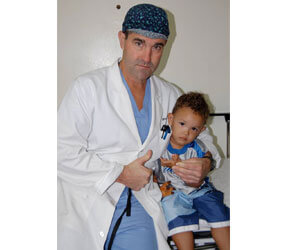 Twice a year, patients stream into Centro Medico, a hospital in the town of La Romana in the Dominican Republic, hoping for a miracle.

Many are poor, malnourished children with congenital problems, such as syndactyly – webbed fingers – or duplicate thumbs; some have been severely burned and untreated; others are victims of neglected limb fractures, paralysis and machete accidents.

One thing is certain: if anyone can help them, it’s Dr. Michael Murphy and his team.

Murphy, an orthopedic surgeon with Greater Chesapeake Hand Specialists (CGHS) in Lutherville, runs a mission of mercy to the Dominican Republic every April and November, most recently April 9-16. During each seven-day trip, Murphy and his team provide free medical treatment for approximately 150 needy residents.

Murphy has been traveling to the Dominican Republic to perform surgeries for more than 10 years. He oversees the program, recruiting nurses and fellows working in the Baltimore-Washington region to accompany him.

Murphy, a parishioner at St. Ignatius in Baltimore and chairman of Catholic Charities’ Healthcare Professionals Breakfast, in support of health services to Baltimore’s immigrant population, traveled this month with several fellows from Union Memorial.

Because Centro Medico is not equipped for the intricate surgeries Murphy and his team perform, they bring their own supplies.

“We have to use trash bags to keep the patients warm during surgery,” he said. “We don’t have enough blankets. … They don’t have the equipment, and we can do what they can’t do, but I couldn’t do it without the support of the local medical staff.”

The Dorothy Scott Fund at the Union Memorial Hospital provides for airfares for the medical team. An associate’s family owns the Casa de Campo resort in La Romana, where Murphy and the crew stay free of charge.

Casa de Campo is a part of the Central Romana Corporation, the largest private employer in the Dominican Republic, located alongside Haiti on the Caribbean island of Hispaniola. The corporation designed Centro Medico as a private hospital for employees and their families, but opens it to others in the poverty-stricken community twice a year, for Murphy’s visits.

The team arrives on a Saturday and has clinic all day Sunday, seeing patients who have been pre-screened by Dominican doctors, as well as walk-ins. They operate for five days straight, then hold post-op visits.

Most of Murphy’s patients are children. The adults he sees are often injured in machete fights or industrial accidents, as a result of using techniques and machinery common to the 1950s in the U.S.

“Most of the people work in the sugar plants, and they need good, functional extremities for that,” Murphy said. “If you don’t, you’re in trouble.”

Murphy emphasizes “Projecto de la Mano” relies upon help from many. The nurses who travel with him typically donate a week of vacation to volunteer; another organizes and sterilizes all the equipment before the trips.

GCHS donated its old power equipment to the Dominican facility. It also arranged for some of its suppliers to donate materials, including eight large boxes of disposable drapes and gowns from Medline and boxes of instruments from Synthes.

The GCHS Lutherville staff is very involved in planning for the trips, collecting kids’ and adults’ baseball hats and shirts, prom dresses, teddy bears, toys, coloring books and colored pencils to deliver to patients and families treated by Murphy’s team. Some of those items are donated to a local orphanage.

Over the years, Murphy has gotten to know the people of the town, and they him. He even learned some Spanish, writing post-op directions in their native language on the patients’ bandages.

“They are really good-hearted people, happy people, very appreciative of what we do,” he said of La Romana’s population.

As an offer of thanks, one lady gave Murphy a live duck, which he kept at a Dominican doctor’s farm. In return, Murphy and his team, in addition to critical medical care, provide patients with a bounty of Hershey chocolate bars, a favorite of the locals.

“As long as I am able to, I will go,” Murphy said. “But you have to be able to come back. They have to trust you that you are coming back, and they will wait six months for you.”