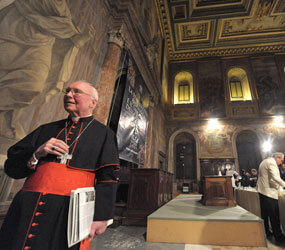 VATICAN CITY – In almost six years dealing with the most sensitive and serious matters of individual conscience, U.S. Cardinal J. Francis Stafford said he has had the “enormous grace” of coming to a deep understanding of how central forgiveness is to the message of the Gospel and the mission and life of the church.

Everything the church celebrates and everything it offers the world in terms of education and social service “is dependent on our being freed from the burden of guilty,” the Baltimore native said June 2, just a few hours after the Vatican announced his retirement as head of the Apostolic Penitentiary, the office that deals with the most sensitive matters of conscience as well as with the practice of indulgences.

“I have re-learned and found a more profound understanding of the mystery of Christ’s redemption and of the anxiety that is part of the human legacy,” he said.

Cardinal Stafford, who served the Archdiocese of Baltimore as an auxiliary bishop from 1976-82, said his work promoting the sacrament of penance, helping people obtain indulgences and acting on behalf of the pope to assist people seeking forgiveness has taught him that the only thing Christians need to be anxious about is doing God’s will and reconciling themselves with one another.

Hearing confessions and meeting people burdened with sin is not always easy, he said, explaining that even St. John Vianney, who heard confessions 18 hours a day for years, asked God on several occasions to free him from that ministry.

But, Cardinal Stafford said, “assisting the Holy Father in his Petrine ministry of binding and loosening – acting in the name of Peter – is an immense privilege and an immense responsibility.”

The message of the Gospel, celebrated in the sacrament of penance, is that “God’s gift of forgiveness is so great that all we have to do is accept it,” he said.

The cardinal, who will turn 77 in July, has led the office since 2003. He began his service at the Vatican in 1996 when Pope John Paul II asked him to leave his post as archbishop of Denver to become president of the Pontifical Council for the Laity.

Announcing the cardinal’s retirement June 2, the Vatican said he would be succeeded by 73-year-old Italian Archbishop Fortunato Baldelli, who has been the Vatican nuncio to France for the past 10 years.

Because cardinals continue to serve as members of Vatican congregations and pontifical councils until their 80th birthdays, Cardinal Stafford said he intends to continue living at the Vatican. He is a member of the congregations for the Doctrine of the Faith, Saints’ Causes, Bishops and for the Evangelization of Peoples, as well as of the Pontifical Council for Legislative Texts.

The “penitentiary” in the name Apostolic Penitentiary refers to the penitential issues it handles. One of three tribunals of the Holy See, it is divided into two offices: One governs indulgences, and the other is a court that handles cases of conscience and absolves individuals from sins reserved to the Holy See.

The office also commissions priests to serve as confessors in the major basilicas of Rome and runs an annual specialized course for priests on the sacrament of penance and conscience.

Hosting a conference in January to mark the 830th anniversary of the Apostolic Penitentiary, Cardinal Stafford told reporters, “Today we talk a lot about God’s forgiveness, which is a motive for joy and happiness. But I am a bit worried about the lack of awareness of the connection between this joy and the forgiveness of sins.

“We all know the burden of sin in our personal lives, which is why the sacrament of penance really is the sacrament of reconciliation given by Christ to his church. It is a sacrament full of the mercy, charity and love of God,” he said.