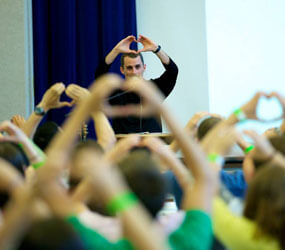 Jesuit Father Phil Hurley was back home July 8-9 and he couldn’t have been happier.

Father Hurley grew up in St. Joseph Parish in Sykesville and attended Mount St. Joseph High School and Loyola University Maryland during the early-to mid-1990s. His home diocese did not disappoint.

Father Hurley, the youth and young adult director for the Jesuit-run Apostleship of Prayer national office, saw 150 young adults gathered for his organization’s Hearts on Fire retreat at Our Lady of Perpetual Help in Ellicott City.

“It’s very edifying for me and very consoling to see that it’s our largest crowd ever and just to see the vibrant young adult community here,” said Father Hurley, 36. “A lot of the people here are younger than I am and in their 20s. It’s really good to see the young adults of this area.”

Hearts on Fire was administered by Jesuit priests and scholastics and open to young people aged 18 to 39.

The retreat included large-and small-group workshop sessions, adoration of the Blessed Sacrament, Mass, music and Ignatian spirituality. Many of the presentations had contemporary approaches to helping young adults be in touch with their Catholic spirituality.

“Our hearts are not on fire on their own,” Sawyer said. “They catch fire from the heart on fire – the sacred heart of Jesus.”
The Hearts on Fire retreat was co-hosted by Our Lady of Perpetual Help and the Archdiocese of Baltimore’s Division of Youth and Young Adult Ministry. Hearts on Fire has visited several dioceses during the summer and is slated to minister to Richmond, Va., Philadelphia and Charlotte, N.C.

The program is now two years old and growing as more dioceses attempt to expand their outreach to the elusive young adult demographic. Many have graduated from high school and no longer have youth ministry options. Some have left college or are starting families. They are looking for a place to belong in the church.

“They should be integrated into the parishes, working in ministries like any other adult, but sometimes it’s good to be among your peers,” Father Hurley said.

Almost universally, attendees said they were yearning for a connection to their Catholic faith.

Holy Family in Randallstown parishioner Sarah Emerson, 18, heard about Hearts of Fire from her mother, who had seen it advertised in a local parish. After Emerson researched the Hearts on Fire website, she was intrigued.

“I feel welcome and like I’m a part of something,” Emerson said. “I’m a first-timer. I like it. I feel like myself. These are my peers.”

Emerson said many recent high school graduates like herself are in an in-between stage, trying to find their place in the Catholic Church.

“Coming back here,” Emerson said, “it feels like I’m part of something.”