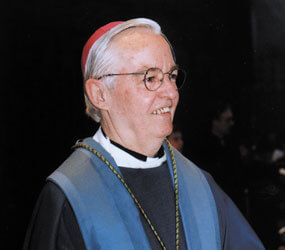 It wasn’t uncommon for the late Bishop P. Francis Murphy to repeat a person’s first name several times in a short conversation. It wasn’t mere artifice. The personal touch was the western vicar’s way of making a connection and genuinely trying to listen to what a person had to say.

“What stood out about him was his sincerity,” remembered Benedictine Sister Patricia Kirk, a former prioress in her religious community. “I’ve been at meetings where he was able to be as comfortable with the everyday person as those in leadership. There was no distinction with him.”

Ten years after Bishop Murphy died of cancer at age 66, people throughout the archdiocese are remembering the Cumberland native as a gentle leader with a prophetic voice. A series of memorial Masses and special events are planned for the next several months to commemorate a life devoted to social justice and the dignity of every person – a man many admire for living out his episcopal motto: “To listen to God speaking in human words.”

“I think Bishop Murphy had a style that was very inviting for people to explore their gifts and ministry,” said Bishop Mitchell T. Rozanski, whose vicariate includes the same Western Maryland counties that Bishop Murphy had led.

Bishop Rozanski credited his predecessor with being a good planner in Western Maryland. He encouraged priests, deacons, religious sisters and members of the laity to work together, Bishop Rozanski said. It was under Bishop Murphy’s leadership that religious sisters began serving as some of the first pastoral life directors in the Archdiocese of Baltimore – taking on the day-to-day administrative responsibilities of several parishes.

Bishop Murphy had a special sensitivity to involving women in the life of the church, Sister Patricia said.

“The role of women in leadership was very important to him,” Sister Patricia added. “He was very much a Vatican II person, so it was in his heart and soul to promote the laity – and women were very much a part of that.”

Sulpician Father Robert Leavitt, former president-rector of St. Mary’s Seminary and University in Roland Park, said Bishop Murphy firmly believed that too many lay people were “excluded from the conversation at the highest level of church leadership.”

Some thought that Bishop Murphy pushed too hard on women’s issues. In 1992, when the U.S. bishops were in the midst of writing a pastoral letter on women, Bishop Murphy wrote an article in Commonweal in which he condemned the “sin of sexism” and urged the ordination of women “because justice demands it.”

Pope John Paul II would later issue an official decree in 1994 stating that the priesthood in the Catholic Church is reserved to men.

“Bishop Murphy wanted to bring the laity all together – and women in particular – into a closer relationship with the hierarchy,” Father Leavitt said. “Sometimes in saying that, individuals thought he was angry. Bishop Murphy didn’t have an angry bone in his body.”

Father Leavitt noted that Bishop Murphy had a profound love for the priesthood, a passion for ecumenism and interfaith understanding, and a deep respect for the hierchy going back to his time as a seminarian at the Pontifical North American College in Rome.

Monsignor Thomas Bevan, pastor of St. Patrick in Cumberland, remembered that his friend was a very compassionate man. Beginning in the 1970s, Monsignor Bevan recalled that Bishop Murphy reached out to men who had left the priesthood – making them feel loved by the church no matter the reason for their departure. It was an outreach Bishop Murphy kept up throughout his life.

Bishop Murphy was very influenced by the papal encyclicals on peace and justice, Father Leavitt said. He was one of the key leaders behind the American bishops’ pastoral letter on nuclear weapons and world peace. Bishop Murphy also spoke out against nuclear weapons during congressional hearings and published letters on the topic.

Sister Diane Bardol, a Grey Nun of the Sacred Heart and executive director of the Murphy Initiative for Justice and Peace, said Bishop Murphy was committed to educating the wider public on peace and justice issues. The initiative she leads is named in Bishop Murphy’s honor.

“He wasn’t just a clear thinker who spoke well of issues,” Sister Diane said. “He put his thoughts and words into action. His faith was alive and active.”

Although his vision was very global, Bishop Murphy never forgot where he came from.

Monsignor Bevan noted that as Bishop Murphy grew up at St. Mary in Cumberland, he saw the effects of a struggling economy. People he knew who worked for the railroads lost their jobs and struggled to support their families, Monsignor Bevan said.

Bishop Murphy co-founded Interfaith Housing of Western Maryland in 1989 to provide affordable housing for lower-income families and seniors. The organization has since broadened its scope beyond Western Maryland and today also helps families in Pennsylvania and West Virginia. Linda Irvin-Craig, fund development officer of Interfaith Housing, noted that Bishop Murphy was a tireless fundraiser for her organization.

“We still get checks from some of those initial contacts,” Irvin-Craig said. “His impact was just incredible.”

Interfaith Housing has established 1,100 affordable housing units for the poor – including some named in Bishop Murphy’s honor.

Today, a street in Frostburg carries Bishop Murphy’s name – as does the Bishop P. Francis Murphy Endowment Fund for Western Maryland, which was established in 1998 on the 40th anniversary of Bishop Murphy’s ordination to the priesthood. The fund operates under the auspices of the Catholic Family Foundation.

“At this10th anniversary, it’s very important we remember his work amongst us,” Bishop Rozanski said.

Conference on “The Leadership Role of Women in the Church” featuring Dr. Diane Caplin, director of Mount St. Anges Theological Center for Women. Sept. 12 from 9 a.m. to 3 p.m. at Bon Secours Spiritual Center in Marriottsville.

Murphy Initiative Benefit Concert with the Handel Choir of Baltimore, held at St. Mary of the Assumption in Govans. Jan. 31 at 4 p.m.