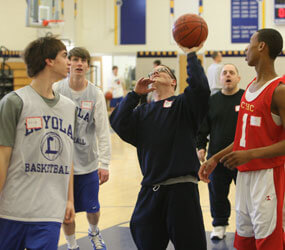 TOWSON – Anthony Day, the principal of Loyola Blakefield School, was about to lead a prayer the morning of Feb. 21, when one of his guests asked to do so.

“Thomas (Billings) didn’t just lead us in prayer,” said Bill McCarthy, the executive director of Catholic Charities of Baltimore, “he informed us he would also lead us in the Pledge of Allegiance.”

Billings was among the clients of Catholic Charities’ Gallagher Services for People with Development Disabilities who spent several hours in the Blakefield gym, where members of the Dons and Calvert Hall boys’ basketball teams were helping out in the Baltimore Catholic League’s inaugural service day.

“They’re no different from us, they just learn differently,” said Michael Wade, a Calvert Hall senior. “They interact the same way we do. One of our guests, Kevin, didn’t want to play at first. We encouraged him to shoot. He made two shots, and said that was good enough for him.”

The Blakefield gym was one of four sites where members of the eight BCL teams performed service with Catholic Charities clients while schools were closed for Presidents’ Day. It is a lead-in to the 40th annual BCL tournament, which is to begin Feb. 24.

“This is part of our mission, putting the needs of others before our own,” said Day, the Loyola Blakefield principal. “I love that Calvert Hall is with us, we’re usually going head to head against each other. This is inspiring in a lot of ways.”