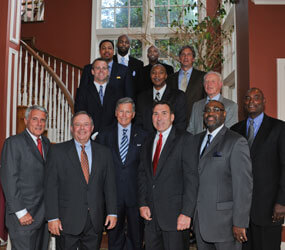 Tony Guy traveled all over the world thanks to basketball, but the Loyola Blakefield graduate knows it would not have been possible without the Baltimore Catholic League.

“Everything that you’re doing and have done over the years impacts young men’s lives in a way that very few other things do,” Guy told the audience of 312 at the sold-out May 19 Baltimore Catholic League Hall of Fame dinner at Rolling Road Country Club. “You know what? The lessons learned and the values gained are truly worth paying for.”

Guy was one of 17 former coaches and players inducted in the BCL’s first hall of fame class. Men instrumental in establishing the 40-year BCL dominance like John Plevyak, Christian Brother John Smith, Cardinal Gibbons coach Ray Mullis and Loyola Blakefield coach Jerry Savage were honored for their legacies by players and family members.

Recent stars like Rudy Gay and Will Thomas, who battled on the court for Archbishop Spalding and Mount St. Joseph were unable to make their inductions.

Williams said the BCL has coaches who care about the development of people.

“I’m just really impressed the Catholic league has had those types of people as coaches,” Williams said.

Guy and fellow Loyola player and inductee Peter Budko honored Savage for building the Dons program into one of the Baltimore area’s best.

Steve Wojciechowski, a former Cardinal Gibbons player, praised his late coach Mullis and the BCL. Now an assistant coach at Duke University, he said, “There’s not a finer league in the country than the BCL.”

“I was blessed,” Karcher said. “I wanted to be one of you guys.”