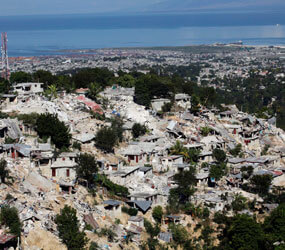 WASHINGTON – Baltimore-based Catholic Relief Services has been asked by the Vatican to coordinate the church’s relief and recovery efforts in earthquake-ravaged Haiti.

The Pontifical Council Cor Unum, the Vatican office that promotes and coordinates Catholic charitable giving and distributes the money the pope designates for charity, made the request of the U.S. bishops’ aid agency because of its experience and expertise in Haiti, the most impoverished nation in the Western Hemisphere.

The council said in a statement released Jan. 14 that hundreds of CRS personnel have “long been active in Haiti.”

“The past experience, expertise, and resources of CRS will enable prompt and effective coordination of the church’s efforts, which in the words of Pope Benedict, must be generous and concrete to meet the pressing needs of our Haitian brothers and sisters,” it said.

Around the world, dozens of private Catholic agencies initiated fundraising efforts, and dioceses announced special collections at Sunday Masses to fund the relief efforts of CRS, Caritas Internationalis, Caritas Haiti and other Catholic agencies and religious orders already in the country.

The most severe damage was limited to the Haitian capital and areas to its south and west. The epicenter of the Jan. 12 magnitude 7 earthquake was 10 miles southwest of Port-au-Prince with severe damage extending outward. Relief agencies estimated that as many as 3 million of Haiti’s 9 million people were either injured or homeless because of the temblor.

The Haitian Red Cross estimated Jan. 14 that up to 50,000 people died in buildings that collapsed during the quake, which struck late in the afternoon while people were still in offices and classrooms or at home preparing dinner. Some agencies reported the death toll could top 100,000.

CRS has made an initial commitment of $5 million in aid, an amount that John Rivera, the agency’s communications director, said would last barely a week.

Because conditions in the earthquake zone are treacherous and needs were still being assessed, CRS was sending a few additional staff as well as relief supplies through the neighboring Dominican Republic, said Pat Johns, the agency’s director for staff safety and security.

Two staff members based in the Dominican Republic – an expert in natural disaster response and a civil engineer – were due in the Haitian capital the afternoon of Jan. 14, he said. A third, an expert in shelter, was expected to arrive from Kenya by Jan. 16.

“Immediate relief was to start today,” he told CNS Jan. 14. After the 2008 hurricanes, “by the luck of God we decided to do some pre-positioning of supplies in Port-au-Prince. There are goods in warehouses, like water, bedding, mosquito nets.”

Johns said CRS staffers were planning to make their way to the warehouses Jan. 14 to begin distributing supplies. He said it was not known if any of the warehouses were damaged by the quake or the dozens of aftershocks.

The Camillian order was operating the only hospital in the Port-au-Prince area not destroyed in the earthquake, the Vatican missionary news service Fides reported Jan. 14.

Camillian Father Efisio Locci, director of health and development for the Order of St. Camillus, Order of Servants of the Sick, told Fides the hospital was full and “in need of practically everything.”

“Now is the time to roll up our sleeves as Don Bosco did and help those in the greatest need,” Father Chavez said.

The Rome-based Knights of Malta sent a medical team to assist with medical care in Haiti. Under the auspices of the order’s emergency relief program, Malteser International, doctors and other medical experts from France and Germany were deployed.

Father Jose Antonio Sandoval Tajonar, regional coordinator of Caritas for Latin America and the Caribbean, left Mexico City for Haiti Jan. 14. The eight-member Caritas team that accompanied him included five rescue workers from an area near the Belize border often hit by hurricanes.

Elsewhere, Catholic agencies had pledged hundreds of thousands of dollars in aid as of Jan. 14.

Development and Peace, the official development and aid organization of the Catholic Church in Canada, has launched an emergency appeal to support humanitarian aid to the devastated country. The agency has committed an initial pledge of $50,000 to Caritas Haiti, which operates 200 medical clinics in the country.

CAFOD, the overseas development and relief agency of the Catholic Church in England and Wales, made an immediate pledge of $162,000 for water, food, medicine and shelter for victims in the worst affected areas.

Contributing to this report were Carol Glatz and Father Matthew Gamber in Rome and David Agren in Mexico.