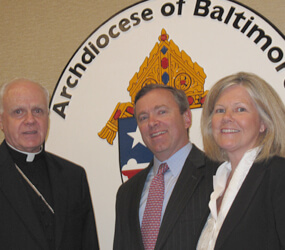 William J. Baird III required fewer introductions than normal May 13, when Archbishop Edwin F. O’Brien announced his appointment as the chief financial officer for the Archdiocese of Baltimore.

Baird’s 25 years in the banking and securities industry, most recently with Brown Advisory and Deutsche Bank Alex. Brown, have been bolstered by board positions and volunteer work for Catholic Charities, Good Samaritan Hospital, Loyola Blakefield in Towson and Loyola University Maryland.

Baird was educated at those Jesuit institutions and the parish school of Shrine of the Sacred Heart in Mount Washington.

Institutional knowledge of the archdiocese runs deep in his family, as the late Cardinal Lawrence Shehan, the 12th archbishop of Baltimore, was a great-uncle, and Baird’s uncle, Lou, was formerly the facilities director for the archdiocese.

“We wanted someone who was in synch with the mission of the church,” Archbishop O’Brien said, “The fact that we have someone who is experienced in the financial sector, well-respected here and terribly committed to the church … I think we got the jackpot.”

Baird spoke of the challenges ahead, referencing the April 30 elimination of 30 positions at the Catholic Center in response to a $1.68 million operating deficit in fiscal year 2009 and a reorganization of schools that will close 12 elementary schools and one high school at the conclusion of the current school year.

“We have a lot of work to do,” Baird said to Catholic Center staffers. “Obviously, you have been carrying a heavy load of late.”

Baird’s experience goes beyond Baltimore. He managed the Alex. Brown office in Greenwich, Conn., from 1997 to 2001, then took a similar position in San Francisco until 2005, when he returned to the area.

Baird and his wife, Mary, are parishioners of Church of the Nativity in Timonium. They have three children, Billy, 18, Emma, 16 and Tommy, who will turn 14 May 19. Emma is a student at Maryvale Preparatory School in Brooklandville, and the boys attend Loyola Blakefield, where Billy will soon become the fourth-generation of his family to graduate.

Baird’s first day in his new position will be July 19. He replaces Joseph A. Spadaro, who retired in 2009.