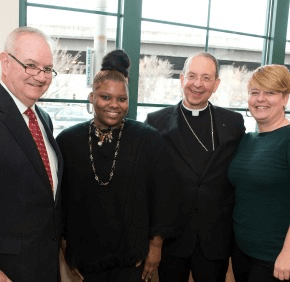 By Paul McMullen
pmcmullen@CatholicReview.org
Twitter: @ReviewMcMullen
Shawnta Stern returned to Our Daily Bread Employment Center Dec. 7 in a much improved state of mind, and spirit.
A little more than a year after she waited in line with an infant son in her arms for the center’s signature hot meal program, Stern stood at a podium and shared her story with Archbishop William E. Lori and hundreds of other guests at the 36th annual Catholic Charities Leadership Breakfast.
Orphaned at 14, Stern became pregnant at 25. In rapid order, circumstances that included a city housing program losing its funding left her and her son without a home.
Shawnta Stern shares her story during the 36th annual Catholic Charities Leadership Breakfast at Our Daily Bread Employment Center Dec. 7. (Courtesy Catholic Charities)
“We ate meals here at Our Daily Bread,” Stern said, of a comprehensive resource center where she kept hearing about Sarah’s House.
Stern and her son, Tai’Dyn, now reside in the supportive housing program for the homeless in Fort Meade. When she’s out working one of her two jobs, her baby is in good hands in its childcare center.
“Sarah’s House,” Stern said, “is designed to help you establish your independence and gain back what you’ve lost – or, maybe, never had.”
She singled out Kelly Anderson, the client services manager of Sarah’s House, just one of the 2,300 employees of the social services arm of the Archdiocese of Baltimore.
In fiscal year 2016, Catholic Charities secured 447 permanent housing placements for those needing a stable place to live, and job placements for 341 people out of work.
The leadership breakfast brings together major benefactors of Catholic Charities. According to Patricia M.C. Brown, the 2016 chairwoman of the event, it has raised approximately $35 million over the years.
“This is what we’ve been raised to do,” she said.
William J. McCarthy Jr., the executive director of Catholic Charities of Baltimore, noted that the year 2016 included the 35th anniversary of Our Daily Bread’s program – uninterrupted, no less – and the Dec. 3 passing of Robert E. Hecht Sr., a former president of the board of trustees of Catholic Charities.
“His imprint continues today,” McCarthy said.

From Mexico to Dundalk to Manhattan, Guadalupe runners carry torch for faith, immigrants