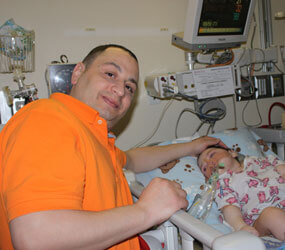 WINDSOR, Ontario – A 20-month-old Canadian boy who was at the center of an end-of-life debate died at home Sept. 27.

Joseph Maraachli died with his parents, Moe and Sana, by his side, six months after receiving a tracheotomy at a Catholic hospital in St. Louis. The procedure allowed him to return home to be cared for by his family.

A graveside service for Joseph, who was baptized Catholic, was planned for Sept. 28.

“I visited the family about 10 days ago and recent doctor reports said he was doing well, so this came as a surprise to them,” Brother O’Donnell said.

He posted an announcement of the child’s death on the Save Baby Joseph Facebook page late Sept. 27. Words of condolence and prayer offerings immediately flooded the site.

Born in January 2010, Joseph had a history of health problems. He was admitted in October 2010 to the London Health Sciences Centre. Hospital officials, who called the boy’s condition fatal, wanted to take the child off his feeding tube and ventilator, allowing him to die. The Maraachlis refused.

In March, Joseph and Moe were flown to SSM Cardinal Glennon Children’s Medical Center in St. Louis, where the tracheotomy was performed.

Doctors also diagnosed Joseph with Leigh’s disease, a progressive neurological disease that usually strikes children between the age of 3 months and 2 years. It causes the degradation of motor skills and eventually death.

“The doctor (in London) said he would never be able to support his head on his own, but he was able to do that. Doctors in London said his brain would never grow, but he underwent an MRI last month and his brain had grown seven centimeters,” Brother O’Donnell said.

The Maraachli family was assisted in their journey to St. Louis by Father Frank Pavone and Priests for Life.

In a Sept. 28 statement, Father Pavone offered his support to the family and thanked supporters who joined with his organization in helping the Maraachlis.

“From my first conversation with Baby Joseph’s parents, they expressed to me their trust in God. They had no demands of him regarding how long their son would live. They just wanted to fulfill their calling to love their child unconditionally and to protect him from those who considered his life worthless,” Father Pavone said.

Joseph is also survived by a brother, Ali, 7.