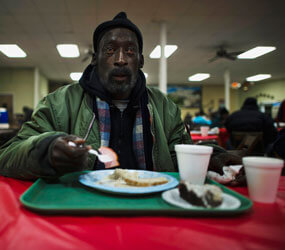 WASHINGTON – With election-year politics pretty much guaranteed to clog up the process of passing legislation this year even more than partisan posturing did in 2011, Washington wish lists for policy and legislation are brief and heavy on defensive thinking.

Retaining funding for crucial international aid programs; preventing drastic cuts to the domestic poverty safety net, extending the availability of unemployment insurance and fostering a measured approach to international hot spots including Iran, Syria and North Korea are as ambitious as it gets for the legislative and policy agenda of the U.S. Conference of Catholic Bishops and some other advocacy organizations.

For example, high on the list is fighting for the continuation of unemployment insurance. Congress included a two-month extension just before Christmas in a bill that also temporarily extended the payroll tax cut.

While the bill didn’t expand the number of weeks one may claim unemployment insurance benefits beyond the current 99-week maximum, it did head off a return to a 26-week maximum that existed before Congress approved a series of extensions. Keeping those extra weeks available will be considered crucial to easing the plight of the unemployed while the economy continues to recover.

Kathy Saile, director of domestic social development for the USCCB, said her staff will be working to protect that unemployment extension and watching out for other efforts to cut funding to other safety net programs and those that help poor and vulnerable people.

The farm bill comes up for renewal in September, and Saile said that while final votes may be put off until after November’s elections, the months leading up to that will likely include hearings and committee meetings about how to treat the components of the farm bill, which include: food stamps, subsidies to farmers, international food aid, agriculture preservation and conservation.

Virginia Farris, foreign policy adviser in the Department of Justice, Peace and Human Development of the USCCB, said she will be watching out for poverty-focused humanitarian emergency assistance, particularly as Congress eyes places to cut budgets. And she’ll also be monitoring religious freedom issues.

The U.S. Commission on International Religious Freedom was reauthorized just before Christmas, beating back an effort to let the rights-monitoring organization fade away. Despite early attempts by some in Congress to reduce the number of commissioners of the organization, it will continue to have nine members. But they now will be limited to two two-year terms, meaning six of the current members will have to step down. Congress and the White House can appoint new people to get the commission back to nine members.

Their work is likely to be curtailed somewhat by a $1.2 million budget cut, however. The commissioners are unpaid, so the budget reduction from $4.2 million to $3 million will mean staff will have to be reduced and travel likely will be cut back, meaning commissioners will be able to visit fewer countries to study their situations.

Richard Coll, another foreign policy adviser at the USCCB, focused on Latin America, said he’ll be eyeing possible legislation related to free trade agreements, how they are implemented and how well participating countries – notably Colombia – are upholding their end of agreements to protect labor and human rights, for instance.

He also said he’d be watching developments related to Cuba. Several members of Congress attempted to amend year-end legislation to roll back Obama administration changes that made it easier for Americans to visit or send money to relatives in Cuba. The U.S. and Cuban bishops have opposed rollbacks; in fact they have advocated for further easing of the economic embargo the United States has had against Cuba for more than 50 years.

And a third policy adviser for the USCCB, Steve Hilbert, who monitors Africa policy, said maintaining the level of foreign assistance is one of his priorities.

“So far we’ve survived with a lot less damage than we expected” from budget-cutting, he said. And U.S. policy in troubled areas, particularly Iran and Syria, will be high on his watch list.

Managing possible transitions of power in those countries and other hot spots, peacefully and with as little instability as possible, is the approach he’ll encourage in representing the USCCB’s views to congressional and administrative staff.

But while expectations are low for much to happen in Congress, lots of attention will be focused during the first half of the year on the Supreme Court. The court will spend a highly unusual three days in March reviewing legal questions related to the Patient Protection and Affordable Care Act.

Three Florida challenges raise questions about different aspects of the national health care program signed into law in March 2010. The court set aside five and a half hours for oral arguments March 26-28. The court will consider the constitutionality of the law’s mandate that every American buy health insurance by 2014; whether the law “must fail” if the mandate is struck down; and the constitutionality of expanding the Medicaid program for the poor and disabled.

In April, the court will take up Arizona’s immigration law, which is also likely to have far-reaching implications.

Kevin Appleby, director of migration policy and public affairs for the USCCB, told CNS that the court’s decision on Arizona’s law, known as S.B. 1070, “could really change the dynamics of the immigration issue in this country. If the court were to uphold the Arizona law, then all the state laws which have been passed … which are in some cases even harsher, will be given new life and will go forward.” He cited Alabama and Georgia as two states where the laws as passed are even more restrictive than that of Arizona. Key provisions of both of those laws have also been blocked by the courts.

Rulings in the health care and immigration cases are expected by the court’s usual adjournment date in June.