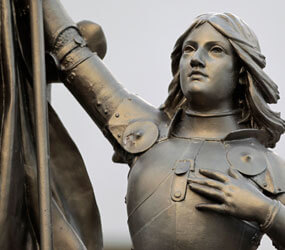 “For the church, Joan is a saint. For the republic, she’s the incarnation of the finest French virtues, including a patriotism that consists of loving one’s homeland without resenting others,” the president said Jan. 6 after attending Mass at Domremy to mark the 600th anniversary of her birth.

Celebrations throughout the year will include Masses, conferences and theater productions, as well as a national pilgrimage in February. In May, Paris Cardinal Andre Vingt-Trois, president of the French bishops’ conference, will celebrate a jubilee Mass in Domremy.

St. Joan, a 19-year-old peasant girl, was burned at the stake in Rouen in 1431 after rallying a French army against English invaders and lifting the siege of Orleans. The national heroine, who was canonized in 1920, is widely credited with altering the course of the 1337-1453 Hundred Years War and strengthening French nationhood.

In a speech at Vaucouleurs, Sarkozy said St. Joan had generated “sarcasm from those for whom courage could only be masculine” and skepticism about the voices she claimed to have heard, calling on her to save the country.

“But Joan was really the face of the first French resistance in an era when the national conscience was being forged amid the most terrible ordeals,” the president said.

“Were these voices addressed to the soul of a Christian, or did they come directly from the heart of little French girl? No one can answer this question, and I think it’s wisest to leave Joan her mystery, respecting her faith and courage.”

He added that she represented “everything most noble and humble” and did not belong “to any party, faction or clan.”

“Joan embodies the Christian roots of France, but this doesn’t in any way harm the secular values we so much believe in,” Sarkozy said.