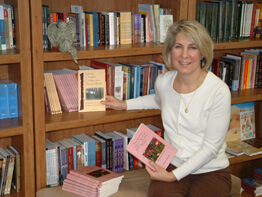 LOS ANGELES (CNS) – The message that women are worth more than their appearance, social status or monetary income is something that Catholic author Cheryl Dickow has tried to get across in her nonfiction books and now hopes also to do through fiction writing.

“It is my prayer to bring a strong female presence to Catholic fiction which is fairly nonexistent when compared to the same market for our Protestant and evangelical sisters-in-faith,” said Ms. Dickow in a phone interview from her home in Waterford, Mich., with The Tidings, archdiocesan newspaper of Los Angeles.

Ms. Dickow, who teaches sixth and seventh grade English at Our Lady of the Lakes School in Waterford, wrote her first book about raising children two years ago.

She called it a simple attempt to combine her “experiences as a teacher and mother under a faith umbrella.” The mother of three teenage boys ages 18, 16 and 14, Ms. Dickow believes in the power of turning to God’s word for help in raising children in today’s modern world.

Writing and giving talks to women’s groups inspired Ms. Dickow to write her second book on women role models found in the Bible. “Reclaiming Your Christian Self in a Secular World” received an honorable mention in the gender issues category of the 2006 Catholic Press Association awards.

“These women are so much like us that they really force us to embrace ourselves in a way that shows our recognition of God’s hand and interest in our lives,” Ms. Dickow said. “Like us, they experienced envy, sadness, joy, sorrow, pain, triumph, fear and anger.”

As she read the Bible, she contemplated Noah’s wife cleaning stalls, cooking food and probably being seasick from the torrential rains and smell of animals. Ms. Dickow realized that on a smaller scale, she could see herself and other women in similar roles caring for their families, friends and neighbors.

Her upcoming fiction work, about a contemporary woman’s journey of faith, is called “Elizabeth: A Holy Land Pilgrimage.” The book was turned down by two Catholic publishers who said they “didn’t do fiction” and was also rejected by an evangelical publishing house.

That was when Ms. Dickow realized she might have to publish it herself. She chose the name Bezalel for the publishing company. It means “in the shadow of God.”

As the first fiction book from Bezalel Books, Ms. Dickow’s “Elizabeth” novel, part of a trilogy, will be out by April. The second book, “Sarah,” will follow in late spring, with “Miriam” released in the fall. According to Dickow, the lives of busy Christian women will be reflected in Bezalel’s inspirational “Women of Faith” fictional series.

“Each book in the series will honestly reflect many of the struggles that today’s Christian women face,” she said.

Ms. Dickow’s nonfiction books are currently available for purchase online through Amazon.com. More information on Bezalel’s fiction books is available from Bezalel Books by phone at: (248) 917-3865, or on Ms. Dickow’s Web site: www.AskKnockSeek.com.