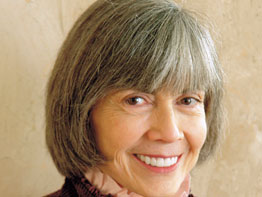 ST. PAUL, Minn. – Most people know author Anne Rice for her detailed characterization of vampires and vivid descriptions of their haunts in the streets and homes of New Orleans, where she was born and raised.

But a growing number of people today are reading Ms. Rice’s second novel about Christ, “Christ the Lord: The Road to Cana.” Her first book on Jesus’ early years, “Christ the Lord: Out of Egypt,” was published in 2005, several years after she consecrated her life to Christ.

Before that time, Anne (O’Brien) Ms. Rice was searching for redemption after her break with the Catholic Church at age 18 and her marriage to Stan Ms. Rice, a professed atheist.

“I made the terrible mistake of losing my faith, of just thinking, if I can’t live within the confines of the church, if I don’t find it possible to do this, if I think the church is wrong, then maybe God doesn’t exist,” Ms. Rice said in a telephone interview with The Catholic Spirit, newspaper of the Archdiocese of St. Paul and Minneapolis, from her home in Rancho Mirage, Calif.

“I stopped talking to God,” she added. “I stopped asking for his help. I stopped really praying. … The mistake was rigidity, it was a lack of flexibility, a lack of being able to open up to some new experiences and not make such a violent break with the church.”

Although those years were financially fruitful – “Interview With the Vampire” (1976) was the first of Ms. Rice’s more than 20 works of fiction – she was filled with guilt that was reflected in her characters. The vampires were a metaphor for the “souls who are away from the light of Christ and live in the darkness of the night,” she said.

Over the years, she said, the characters continued to reflect her despair, guilt and search for meaning and faith. The first fictional vampires were set in the 18th century. Then Ms. Rice and her characters started working their way back in time.

“When I got to the first century and began to study the origin of Christianity and began to study what was going on in the Roman world at the time, I began to realize that I saw patterns that I could not explain, except that God was working in history,” she said.

“I read and wrote myself back into the church through my search,” said Ms. Rice, although she agonized over theological and sociological questions. “Then the day came when I thought, ‘Look, you believe in (Christ), you love him, you want to go home to your church and you want to go back to the banquet table, (and) you want to receive holy Communion again. That means you’re not an atheist, lady!’“

She no longer needed to answer questions about how things would work out or why evil existed or why good people suffer. Jesus knew the answers, so she could let go. She said she had no doubt that Jesus was God when she returned to the Catholic Church in 1998.

Ms. Rice was living in New Orleans, three blocks from the boundary of Nativity of Our Lord in Kenner, La., where Father Curtis Thomas was pastor of the mostly blue-collar parish.

Although everyone in the parish knew who Ms. Rice was, she was just another faithful parishioner who arrived early to pray before the Saturday vigil Mass and chat with people before she left.

“Once, we said it would be nice if some of you would visit the poor box more often,” Father Thomas said in a telephone interview from St. Bonaventure in Avondale, La., where he now serves as pastor. “The next week, a check showed up from Miss Ms. Rice. There was no hoop-de-doo or anything. If there was a need and she valued the need she would try to help meet it.”

Father Thomas, an admirer of Ms. Rice’s vampire novels, also has enjoyed her first two “Christ the Lord” books and said they have “wonderful insights into what may have been the environ that Christ, as a young man, was exposed to.”

He also said there is nothing counter to church teaching in her fictional characterization of Christ.

Ms. Rice has been surprised by some of the criticism she has received. She expected it, somewhat, from Protestants who don’t recognize the perpetual virginity of Mary, she said. But Catholics, too, have criticized her use of the legends about Anna and Joachim, the parents of Mary. Ms. Rice said she combined the Eastern Orthodox and Western views of the children she portrays as Jesus’ cousins and Jesus’ brother, James.

“We know the Lord had brothers and sisters. The Catholics, from the time of St. Jerome, have maintained that those brothers and sisters were in fact cousins,” she explained. “But the Eastern Orthodox have always believed that James was an older brother, that he was a child of Joseph by a former marriage,” she said.

“These (‘Christ the Lord’) books are absolutely Catholic books, but I hope they speak to all Christians,” Ms. Rice said. “People want biblically correct fiction, especially after ‘The Da Vinci Code.’ That was such a debacle, to have that ridiculous novel blown all out of proportion and people actually believing that nonsense,” she said.

“I see ‘The Road to Cana,’ my second novel, as a direct answer to ‘The Da Vinci Code,’“ she added. “No. Our Lord did not marry Mary Magdalene. No. He was celibate and he was sinless.”

Her third book will delve into Jesus’ ministry up to the Passion, which will be the focus of her fourth and final book about Christ.

Ms. Rice didn’t plan to write about the passion when she started the first book on Christ. But her experience with pain and loss has given her insights that have inspired her to continue the series. Her daughter died of leukemia at age 5. Her husband died of a brain tumor after 41 years of marriage. Her parents are both dead and her older sister, Alice, died in 2007.

Those losses have given her “a deep sense of how important it is to love everyone and to value every single moment and every single day,” she said.

Ms. Rice, 66, realizes that she is moving toward the later part of her life. “You watch what people suffer as they die and you see, I think,” she said, pausing to gather her composure before adding, “the mercy of the Lord, the Lord’s tender mercy.”