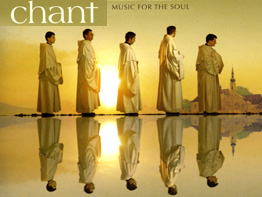 That description might make readers think of “The Sound of Music” and the von Trapp family, but the singers in question are Cistercian monks of Stift Heiligenkreuz Abbey, a 12th-century monastery near Vienna.

Their CD of Gregorian chants has become a phenomenal crossover hit topping pop charts around the world.

The monastery was founded in 1133 and its community has continued uninterrupted since then.

After the European release of “Chant: Music for the Soul” in May, it quickly became the top classical album in Great Britain before crossing over and becoming No. 7 in the British pop charts. Similarly, it’s made the top-10 charts in Austria, France, Australia and Sweden.

When the CD was released July 1 in the U.S. on the Decca label, it became the most popular classical recording. The album sold 55,000 copies in its first two weeks, and sales are still going strong.

In an interview with Catholic News Service while he was in New York, Father Karl Wallner, 45, the monastery’s communications director and webmaster, spoke about the growing interest in Gregorian chants, their spiritual significance, and how he and his brother monks are handling their newfound notoriety.

The priest also is the director of the monastery’s theological academy, the Pope Benedict Pontifical Institute.

“The Bible is the word of God. Our chants are our way of singing it back to God using melodies from the first millennia,” he said. “Everything is about singing thanks to God. Gregorian chant has always been an intricate form of Christian spirituality.”

He described the music as “calming” and having “the ability to touch people’s hearts.”

“Our biggest success is getting people interested in this music,” he continued. “This is a special kind of prayer. God has called us to give him our whole lives.

“Gregorian chant is a means by which we can get in contact with God. God is always near to us even though we don’t realize it,” he said. “God is a melody in my life. He is a piece of music that is always playing in the background. Sometimes I’m not listening.”

Gregorian chant is popular with young people, said Father Wallner. He believes that the monastery receiving 28 new vocations in the past five years is a result of the chanting.

“We never thought this CD would be as popular as it is,” said Father Wallner. “We’re glad about it, but it’s still a surprise. We are not Vienna’s newest boy band.”

At first, some of the monks were reluctant to produce a CD of sacred music, but with assurances from Universal Music that the CD would promote Christian spirituality, the hesitant monks came onboard.

“Gregorian chant is an amazing musical style. It heals and brings one closer to one’s brothers and to God,” the priest said.

He said he was proud of his brother monks for “not getting caught up in this excitement.”

“If any of us wanted money, we wouldn’t have entered the monastery in the first place,” he said. “None of the monks comes to me and asks how the sale of the CDs are going. If they were worried about such things, I would leave the monastery. That’s not why we’re here.”

The monastery earns one euro (US$1.45) per CD sold. In addition, the chants can’t be used as part of a video game or grafted into pop music. The Heiligenkreuz monks will never tour or perform publicly, outside of their chapel.

“Money is important to the monastery but not to the monks,” explained Father Wallner. “The church has preserved an ancient musical tradition. The oldest in Europe and perhaps the oldest in the world.

“More importantly, it is sacramentalized music; it is dedicated to God and is used to express his love for us. It’s important for Christians and non-Christians to learn about this beautiful musical style,” he said.