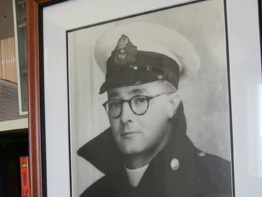 SYDNEY, Australia – An Australian parish priest has been looking for the crest of an American destroyer to display in a church honoring the friendship between Americans and Australians.

Father Paul Hilder of Regina Coeli Memorial Church in the Sydney suburb of Beverly Hills would like to add the crest of the USS Patterson to the church’s memorabilia commemorating the ship, which saved 627 Australians of the HMAS Canberra during a World War II battle.

The church’s founder and first pastor, Father William Evans, was one of those saved during the Battle of Savo Island off the Solomon Islands in August 1942.

However, Father Hilder said he has been unable to make contact with any crew members of the ship, which was decommissioned in 1945 and later was sold for scrap.

“I think it would be fitting to honor the ship and its crew by having its crest on the wall of the chapel,” Father Hilder said. “I’m sure Father Evans would like to have seen it displayed in his beautiful church.”

Father Evans had a deep affection for the United States and Americans after the Battle of Savo Island, when a large Japanese naval force destroyed the HMAS Canberra. The USS Patterson, with help from the USS Blue, rescued the Canberra’s survivors.

More than 1,000 Allied personnel died in the battle, and 700 were wounded. The Japanese sank two American cruisers, and the cruisers HMAS Canberra and the USS Astoria were so badly damaged that they eventually sank.

The experience had a great effect on Father Evans, then 36, and it instilled in him a desire to commemorate permanently the friendship between Australia and the United States. The Regina Coeli Memorial Church was the realization of his dream.

A donation from Cardinal Francis Spellman of New York assisted the building of the church.
The foundation stone was blessed by Cardinal Norman Gilroy of Sydney on Coral Sea Sunday, May 6, 1962, which commemorates the battle of the Coral Sea, one of the war’s turning points in the Pacific. For many years the church sponsored an annual Coral Sea Mass.

The next year, again on Coral Sea Sunday, the church was opened officially. Three years later Father Evans died of a heart attack at age 59.

The church has a side altar called the American chapel, where an American flag and a glass wall bearing an engraved U.S. coat of arms is displayed with a sign: “To the people of the United States of America. In honor of Australian-American Friendship in War and Peace.”

Along the wall of the American chapel are plaques from visiting U.S. Navy ships, including the destroyer USS Goldsborough and the submarine USS Sculpin.