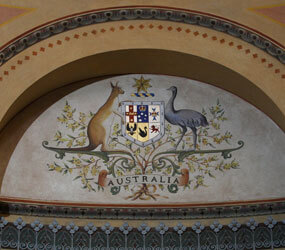 “Now down below here is the dining area, and they’ll be able to eat outside,” he told a visitor, pointing to a pit where foundations had been laid for a breakfast room. The cardinal was pleased to hear that, despite the discovery of an ancient Roman wall during the excavations, work on the breakfast room was moving ahead as planned.

When it’s opened this fall, the “Domus Australia” will provide lodging for some 80 pilgrims, an information center for visitors and daily Mass in a restored chapel on the premises.

It’s the first national pilgrims’ house to be built in Rome in a long, long time, and the Australians faced a daunting list of challenges in a country where cost overruns and construction delays are considered a normal part of doing business.

Visiting the site in mid-February, Cardinal Pell found much to his liking: With more than 70 laborers working full-time, the center was on schedule and within budget.

“We’ve set up this pilgrim center to strengthen the links between Australia, which is nearly as far away as you can possibly be, and the ancient Catholic Church of Rome,” the cardinal said.

By offering spiritual resources and religious information about Rome, “the aim is to encourage tourists to become pilgrims,” he said.

In late 2008, a group of Australian dioceses, led by the Archdiocese of Sydney, purchased the former student house of the Marist Fathers in downtown Rome. The site was considered ideal, in part because it already included a large chapel.

On his recent visit, Cardinal Pell stood beneath the scaffolding and watched workers scrape away layers of paint in the chapel. Already, the apse has been decorated with new paintings, including one that depicts the Australian coat of arms – complete with images of a kangaroo and an emu.

When completed, the chapel will feature other works by a Sydney artist, including a portrait of Australia’s first saint, St. Mary MacKillop. Cardinal Pell said the pilgrim house will have other typical Australian touches, like the “Aussie brekky” meant to sustain pilgrims through their day.

Rooms are comfortable but not luxurious, with TVs, air conditioning and up-to-date bathrooms.

In past centuries, national pilgrim houses were once common in Rome. Today, there are many national seminaries and some visitors’ centers, but it’s rare to find a place designed specifically for a country’s pilgrims.

Church officials said an estimated 60,000 Australians come to Rome each year – more than enough to keep the Domus Australia full.