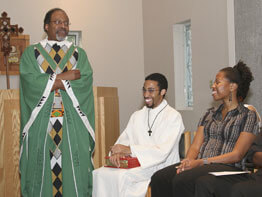 ATLANTA – They can be called sons of Lyke House.

In the past two years, three young men who have worshipped there have begun pursuing religious life or priestly ministry.

The house is the Catholic center at Atlanta University Center, a consortium that serves the city’s historically black institutions.

“I think there is something affirming about Lyke House,” said Desmond Drummer, a 24-year-old who is starting his pastoral year with the seminary program of the Archdiocese of Atlanta.

“I don’t think our vocations were birthed at Lyke House,” he said, but they were “affirmed” there.
The other men are Dominican Brother John Phillips and Christopher Rhodes, a seminarian for the Archdiocese of Louisville, Ky.

Vocations to the priesthood have declined across the country and the numbers of men joining the priesthood from the black community is smaller still. Black people make up about 3 percent of the Catholic faithful in the United States, numbering some 2.5 million.

Lyke House is named for another U.S. black bishop who was the current Atlanta archbishop’s predecessor, the late Archbishop James P. Lyke.

It emphasizes Christianity’s African roots. Mass in its 230-seat chapel starts with an African drum call. Its cruciform shape models one of the oldest Catholic churches in Africa, a rock-hewn chapel in Lalibela, Ethiopia.

“Students who are paying attention will surely leave that place changed, secure in faith and identity and prepared to return to a broader context that often and aggressively assaults both Catholicism and blackness,” said Drummer in an e-mail to The Georgia Bulletin, Atlanta’s archdiocesan newspaper.

Worship at Lyke House shows that Catholicism does not have a “unilateral cultural form,” he said. “The Gospel is transmitted through culture, and this happens in a very real way at Lyke House.”

Rhodes said Lyke House shows the universal features of the Catholic Church. As the only black seminarian at St. Meinrad Seminary in Indiana, Rhodes said he sometimes has a different point of view of the church from his fellow seminarians based on insights he gained at Lyke House.

Lyke House empowers students to do ministry, said its longtime chaplain, Father Edward Branch, who has been instrumental in the growth of Lyke House and became the first full-time Catholic campus minister at Atlanta University Center in 1990.

“They understand if they don’t do it, it doesn’t happen. They are experiencing (ministry) while they are doing it,” he said.

The three men have been exposed to all parts of the church, he said. They saw monastic life, met with theologians and served the church.

Brother Phillips just started his first year as a Dominican. The Morehouse alumnus is living in the novitiate of the religious order in Irving, Texas, for at least a year.

Rhodes, also a graduate of Morehouse College, became a Catholic in 2000 and is now studying to be a priest for Louisville, which is Father Branch’s home diocese. He said he first went to Lyke House as a place to study, but was eventually drawn to its spiritual life.

Drummer has two more classes to finish his economics degree from Morehouse. He works at the Office for Black Catholic Ministry in the Atlanta Catholic Center as part of his pastoral experience before heading to seminary studies.

Drummer wasn’t Catholic when he started college, but he was convinced the church was his spiritual home. He started going to Lyke House during his sophomore year and said he continued to go because it was where he was “spiritually, intellectually and culturally fed.”