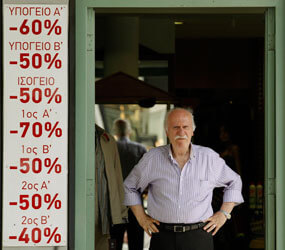 “This crisis could be the worst in our history,” Archbishop Foskolos told Catholic News Service July 6. “There’s corruption everywhere, especially among our politicians. We get no help from the state or other Western churches, and our faithful can’t give any more. Our parishes and dioceses are in deep trouble, and in a few months we won’t be able to support our staffers and employees.”

The archbishop said the higher taxes would have more impact on the Catholic Church than on the country’s predominant state-supported Orthodox Church. But the Orthodox Church still faced “serious problems” after being told its clergy’s state-paid salaries would be cut by half, he said.

“We’re only a small minority, with few properties and resources, and we’ve been burdened in recent years by many Catholics coming here from poor countries in search of a better life, using Greece as Europe’s eastern gateway,” Archbishop Foskolos said.

“Since we joined the EU in 1981, we haven’t received any help from other Western churches, since we’re considered a rich country ourselves and they can only aid the Third World,” he added. “But we have parts of the Third World here in Greece, and it’s creating great pastoral and social hardships.”

The EU and International Monetary Fund agreed to provide $156 billion in emergency loans to help Greece pay off some of its $485 billion debt by the end of 2014.

Archbishop Foskolos said the crisis has forced Caritas Greece, the church’s aid and development agency, and the Sisters of Charity to reduce assistance to refugees and asylum seekers. The Catholic-run hospice and two soup kitchens in Athens also planned to close by the end of 2011 because they did not have the resources to keep them running.

“Many people are suffering real poverty in Greece. Though we are doing what we can, the situation can’t continue,” said the archbishop, who oversees a church numbering 200,000 Greek and foreign members in four dioceses.