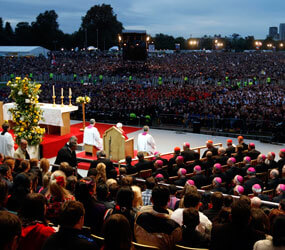 OXFORD, England – Against a backdrop of the twinkling London skyline, the pope urged Catholics to act as a light for those around them in a world “filled with growing noise and confusion.”

“No one who looks realistically at our world today could think that Christians can afford to go on with business as usual, ignoring the profound crisis of faith which has overtaken our society or simply trusting that patrimony of values handed down the Christian centuries will continue to inspire and shape the future of our society,” Pope Benedict told about 80,000 people at a prayer vigil in Hyde Park.

“We know that in times of crisis and upheaval, God has raised up great saints and prophets for the renewal of the church and Christian society,” he said Sept. 18. “But each of us, in accordance with his or her state of life, is called to work for the advancement of God’s kingdom by imbuing temporal life with the values of the Gospel. Each of us has a mission, each of us is called to change the world, to work for a culture of life, a culture forged by love and respect for the dignity of each human person.”

On the eve of the beatification of Cardinal John Henry Newman, the pope said the cardinal had been an “important influence” in his own life and thought. He said the 19th-century theologian’s experience of the “objective reality of Christian revelation” had been “at once religious and intellectual.”

“Newman would describe his life’s work as a struggle against the growing tendency to view religion as a purely private and subjective matter, a question of personal opinion,” the pope said.

“Here is the first lesson we can learn from his life: In our day, when an intellectual and moral relativism threatens to sap the very foundations of our society, Newman reminds us that, as men and women made in the image and likeness of God, we were created to know the truth, to find in that truth our ultimate freedom and the fulfillment of our deepest human aspirations.”

The service, near the exclusive Dorchester and Hilton hotels on Park Lane and office blocks in Knightsbridge, was preceded by film clips on social and human rights issues, as well as hymns from South Africa and Cameroon and performances by Polish, Roma and English dance and theater groups.

A prison pastor, former heroin addict and parents of a murdered teenager also spoke before the pope’s arrival. As he entered the park, musicians performed George Frideric Handel’s “Messiah” and Antonio Vivaldi’s “Gloria.”

In his address, the pope paid tribute to 105 Catholic martyrs who were among thousands executed over the centuries at Tyburn Field, close to the present Marble Arch just beyond the northern end of the vigil arena.

The martyrs included St. John Houghton and companions, killed in 1535, and St. Oliver Plunkett, hanged on the spot in 1681. Non-Catholic Christians also were martyred for their faith on the same spot.

“Without the life of prayer, without the interior transformation that takes place through the grace of the sacraments, we cannot, in Newman’s words, ‘radiate Christ’; we become just another clashing cymbal in a world filled with growing noise and confusion, filled with false paths leading only to heartbreak and illusion,” the pope told the vigil, which was lit by giant spotlights sweeping the sky in the gathering dusk.

“In our own time, the price to be paid for fidelity to the Gospel is no longer being hanged, drawn and quartered, but it often involves being dismissed out of hand, ridiculed or parodied. And yet the church cannot withdraw from the task of proclaiming Christ and his Gospel as saving truth, the source of our ultimate happiness as individuals and as the foundation of a just and humane society,” the pope said.

Rachel Moran, a student from Lincoln, England, who came to the vigil with her face painted in the white and yellow of the Vatican flag, told Catholic News Service: “It’s a real challenge to be a young Christian today, but the pope’s visit has at least given us a chance to make noise and use our energy.”

“It isn’t true that young people are not interested and don’t believe. They just need encouragement and very often don’t get it,” she said.

An Irish singing trio, The Priests, performed during the service, and soprano Liam McNally, a 14-year-old contestant on the popular TV program “Britain’s Got Talent,” sang the Our Father.

Much of the vigil was drowned out by the noise of traffic on nearby Oxford Street and by airliners circling the city every minute en route to Heathrow Airport.