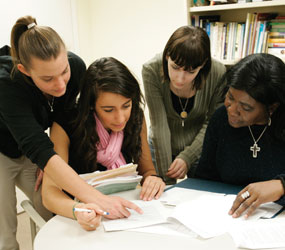 As College of Notre Dame of Maryland sophomore Jessica Rohaly recently prepared for a trip with students and faculty to the United Nations in New York, she knew she couldn’t squander her chance to lobby the world’s leaders.

“If there is someone who is going to listen, you might as well talk,” Ms. Rohaly said.

The Notre Dame contingent took part in the 52nd annual Commission on the Status of Women, which convened March 2-13. The purpose of the meeting was to adopt documents that aimed to bring about equality for girls and women throughout the world.

Ms. Rohaly discovered that someone was indeed listening. A United States representative stood up to make a statement during the commission, using wording that matched Ms. Rohaly’s.

“It was amazing,” she said. “It was unique to hear the language incorporated like that and really humbling.”

The Notre Dame delegation went to the U.N. with the goal of promoting education for women all over the world. Sister Miriam Jansen, director of international programs at the school, was awestruck watching the students talk about their passion for improving the lives of women globally.

“Being part of a global forum is so significant,” Sister Miriam said. “It really illustrates what can happen when people come around a common cause. Several of the students said it was a life-changing experience. They had a chance to really see what life is like for women all over the world.”

Afterward, she said the “awesome trip” exposed her to how the world sees the United States and the importance of being a leader in the world.

“If others get the opportunities we’ve had, they’ll be empowered,” Ms. Bailey said.

Those who went on the trip were left pondering how they could continue their impact on women’s issues beyond their work on the documents.

“I think it’s an uphill battle,” Ms. Rohaly said. “The thing is it’s all just on paper. We need to find a way to implement it.”