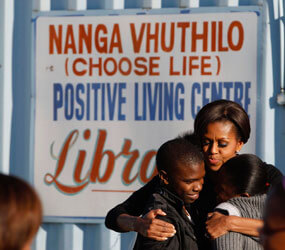 CAPE TOWN, South Africa – First lady Michelle Obama urged a crowd of more than 2,000 that included hundreds of young women to help shape Africa’s future by combating corruption, building strong democratic institutions and working to improve the lives of the poor and sick in a speech at Regina Mundi Church in Soweto.

Obama “spoke from the heart for 45 minutes,” in what Oblate Father Benedict Mahlangu described as a powerful and inspiring presentation.

The church, the largest in Soweto, served as a refuge for anti-apartheid activists for decades. Bullet holes in the ceiling and the broken marble altar have been preserved and serve as reminders of the apartheid era.

Obama invoked the memory of leaders of the U.S. civil rights movement and South Africa’s anti-apartheid struggle to encourage young leaders, including 76 women from across Africa who were brought to Soweto to hear the speech and to meet her.

She said her husband, U.S. President Barack Obama, is focused “on partnering with Africans who will shape their future by combating corruption, and building strong democratic institutions, by growing new crops, caring for the sick. And more than ever before, we will be looking to all of you, our young people, to lead the way.

“You can be the generation that holds your leaders accountable for open, honest government at every level, government that stamps out corruption and protects the rights of every citizen,” she said.

“True leadership often happens with the smallest acts, in the most unexpected places, by the most unlikely individuals,” Obama said, noting that in Soweto in 1976 it was schoolchildren who led an uprising against apartheid that is now commemorated in a national holiday.

Before Obama’s speech, Archbishop Buti Tlhagale of Johannesburg, president of the Southern African Catholic Bishops’ Conference, told of his own experience in South Africa’s struggle against apartheid. Father Mahlangu said the archbishop explained that Regina Mundi Church “has always been a place of protection and of hope.”

The archbishop also reminded people that the struggle for human rights is not over in South Africa and that the church has a crucial role in play in such work, Father Mahlangu said.

He said he told them: “Stand up now, I want to hear your voices.”