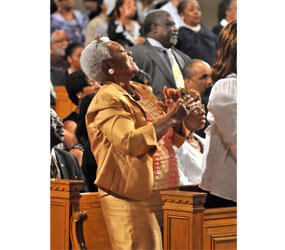 WASHINGTON – The Aug. 23 earthquake that caused significant damage to the Episcopal National Cathedral in Washington led to a change in venue for a planned interfaith prayer service four days later to commemorate the opening of the Rev. Martin Luther King Jr. Memorial.

With Hurricane Irene approaching Washington, the Basilica of the National Shrine of the Immaculate Conception opened its doors for the Aug. 27 interfaith prayer service, which drew nearly 1,000 people from across the country who prayerfully remembered the life and legacy of Rev. King.

Bernice King, his youngest daughter, was among the dignitaries who spoke at the prayer service. Now a Baptist church minister and elder, she was 5 when her father was assassinated in 1968, and said as an adult “I began a quest to try to find my daddy.”

Ultimately, she said she found her father, as an obedient servant of God who once said, “I just want to do God’s will.”

Bernice King then said, “As we dedicate this memorial, as we remember my daddy’s legacy, let it not be about us. Let it be about being obedient to the will of God.”

Monsignor Walter Rossi, the basilica’s rector, welcomed the congregation and expressed sorrow at the damage to the Episcopal cathedral. “Together we join hand, hearts and prayers to honor a great American, a champion of the civil rights movement and a man of unwavering faith,” the priest said.

Bishop John Bryson Chane of the Episcopal Diocese of Washington offered the invocation, noting that “there is still work to do, a promised land to be discovered, and hearts and minds to be changed.”

The dedication of the King memorial, which had been planned for Aug. 28, was postponed until September or October due to the approaching hurricane.

In a later interview with the Catholic Standard, archdiocesan newspaper, Washington Cardinal Donald W. Wuerl, who had been scheduled to attend the dedication, called the memorial “a recognition of (Rev. King’s) achievements in bringing people to a fuller awareness of the equality of all people before God.”

“Dr. King’s message, with its roots deep in sacred Scripture, continues to challenge us to see each other as brothers and sisters, children of the same loving God,” he added. “The memorial will be a striking, permanent presence in the heart of our nation’s capital, calling future generations to live out ‘the dream.’“

In the interview, Cardinal Wuerl said it was fitting that the planned dedication was preceded by “an interfaith prayer service since Dr. King recognized his reliance on God’s grace. In saluting him, we need to recall our dependence on the gracious goodness of God.”

At the prayer service, Harry E. Johnson Sr. who coordinated the design, funding and construction of the King memorial, said he hoped it “will inspire all who visit to reach their own dreams of equality, justice and love.”

The speakers at the prayer service also included Andrew Young, Rev. King’s friend and supporter and the former U.N. ambassador and mayor of Atlanta. Young noted the sacrifices that Rev. King made on behalf of civil rights, even to the point of imprisonment, and his opposition to the Vietnam War, and his ultimate death in Memphis, Tenn., where he had come to support striking sanitation workers.

“The burdens of racism, militarism and poverty were his mountains of despair, and out of each, he was able to hew a stone of hope,” Young said. “Remember, the mountain of despair is still there… (Today) you and I must become stones of hope in the midst of global despair.”

Also at the prayer service, Imam Yahya Hendi, the Muslim chaplain at Georgetown University, offered a prayer for justice, saying, “The way of God is reconciliation, not retribution. The Holy One calls us to find resolution, not revenge. Uniting with God and with one another, we protect the dignity and freedom of all, for injustice anywhere is a threat to justice everywhere.”

Prayers were also offered by Baptist, evangelical, Methodist and United Church of Christ ministers and by a rabbi.