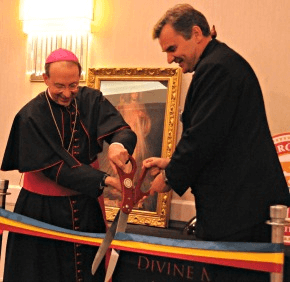 Special to the Catholic Review

ARLINGTON, Va. – Our freedom is wounded by sin, but the “healing power of love” can be found in God’s mercy – received inwardly and extended outwardly, said Baltimore Archbishop William E. Lori.
“If God’s mercy finds a home in our hearts, we are not just going to be recipients, but agents of compassion in a world marked by broken relationships,” the archbishop said during his May 19 lecture, “Religious Freedom in the Year of Mercy.”
It was the fourth and final lecture of Divine Mercy University’s Newman Lecture Series and part of the ceremonial opening of the newly named and expanded graduate school. The evening event included remarks by Legionaries of Christ Father Charles Sikorsky, university president, and Thomas Cunningham, chairman of the board of directors.
Before Archbishop Lori and Father Sikorsky cut a ribbon marking the opening, the archbishop blessed a mace, an ornamental staff carried during commencement processions; a Divine Mercy image from Poland gifted by Susan Pawlukiewicz of the Arlington Diocese; and the university’s new seal.
In his lecture, Archbishop Lori spoke about the Year of Mercy in light of religious persecution around the world, and how mercy heals freedom wounded by individual as well as “structural sin” – the cumulative result of individual sin that distorts true freedom and jeopardizes a flourishing faith.
The Year of Mercy, “is not just a special program to be implemented for 12 months and then forgotten, he said. “The pope is using his jubilee year to call our attention to something utterly fundamental to our lives of faith.”
“Nothing is more fundamental than God’s mercy,” he said. “In Jesus, the Father, who is rich in mercy, bends down in compassion to heal the wounds of human existence caused by sin and injustice.”
Yet we must not only be recipients of mercy, said Archbishop Lori, but also agents of mercy. The pope insists that all church institutions, including parishes and schools, “not be inward looking,” but share God’s mercy in concrete ways – such as housing Middle Eastern refugees.
Turning to mercy in light of religious persecution around the world, Archbishop Lori said that “we live in an age of martyrs.”
“The 20th century was the bloodiest century in history,” he said, and the 21st is shaping up to be equally bloody. “Let us never forget those images of young men who, because of their Christian faith, were about to be beheaded by (the Islamic State group).”
Within such persecution, said the archbishop, “we glimpse what a society without religious freedom looks like.”
While emphasizing that that the faithful should be outraged by religious persecution, he cautioned that we “should not be filled with the same kind of hatred that motivates such violence. … We are called to love those who persecute us.”
He pointed out that religious persecution is not always as obvious as direct violence. Pope Francis says we are in danger of “polite persecution,” which is carried out in boardrooms, courts of law, government agencies and even cocktail parties.
The assault on freedom is in part linked to our original sin, Archbishop Lori said. Because of original sin, we misuse our freedom, which in turn degrades our dignity.
“Often we reduce our freedom to freedom of choice – the ability to do what we want so long as it’s legal or no one seems to get hurt,” he said. People then start settling into a lifestyle with God on the peripheries or void of God altogether.
As fewer people practice the faith, being religious becomes countercultural and religious freedom in society begins “to take a back seat,” he said, adding that when people lose interest in the church, it’s often related to teachings on sexuality.
Pastors must do a better job, he said, explaining these teachings.
The pope is a model of mercy as we reach out to those who have filled their lives in harmful ways, such as with addiction, pornography or illicit sex, said the archbishop. Pope Francis “avoids scolding us … but invites us to consider the depth of God’s love for us.”
Freedom is not only wounded by personal sin, but also by the structures of sin, he said. Peer pressure from media, broad cultural disproval of Christianity, the exclusion of faith from almost all institutions — these constitute structures of sin and are an example of “polite persecution.”
Archbishop Lori said the institutions that are most vital for human flourishing, where freedom is typically exercised and virtue gained – the family, parishes, charities and universities – are coming under assault in part through the redefinition of marriage and family.
“These institutions that are under challenge are places of mercy that seek to bring the healing balm of truth, love and human skill to the spiritual, emotional and physical wounds of human existence,” he said. Thus, “defending religious liberty is itself a work of mercy.”
Archbishop Lori closed the lecture by thanking Divine Mercy University for addressing the wounds of the world and restoring “to those you serve a sense of freedom.”
“For yours is a work of both freedom and mercy,” he said.
Founded in 1999 as the Institute for the Psychological Sciences, the institute was elevated to the status of a university early this year with the addition of a school of counseling. The name change honors its mission to “reach more of those souls who are in much need of help,” said Father Sikorsky.
The event was held at the Hilton Crystal City in Arlington, the more than 80 guests included Washington Auxiliary Bishop Barry C. Knestout, faculty, students and university supporters.
“What we are here for tonight is not really about us,” Father Sikorsky said. “It’s about God; it’s about so many people who are suffering.”
IPS, now a school within the university, will continue to offer a doctoral degree in clinical psychology and an online, nonclinical master’s in psychology. Starting this fall, students can earn a master’s in clinical mental-health counseling through the new school of counseling.
Scott is a staff writer at the Arlington Catholic Herald.