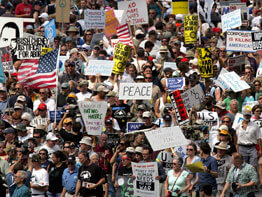 ST. PAUL, Minn. – While K.J. McDonald supported his party as a delegate at the Republican National Convention, his four sisters protested the war outside the Xcel Energy Center in St. Paul, where the convention was held.

“I really feel like I am following the Gospels of Jesus, and I think nonviolence was his total lifestyle,” Sister Brigid said. K.J. and Sister Brigid have three other siblings who are Sisters of St. Joseph in Minneapolis and St. Paul.

“We all feel pretty much the same,” Sister Brigid said. “Where would Jesus be? He’d be in this march.”

Although Sister Brigid protested at the convention, she said she does not consider herself a Democrat, but rather a pacifist who would vote for a “peace candidate,” she said.

“It’s beyond politics; it’s beyond liberal, conservative. It’s beyond Democrat, Republican,” she said.

She doesn’t support any efforts to escalate the war in Iraq, she said. Republican presidential nominee Sen. John McCain’s plan scares her, she said. “What he knows how to do very well is (with the) military – that’s his whole lifestyle,” she said. “I think he really believes it’s the answer. It’s never been the answer.”

She would also have protested at the Democratic National Convention given the chance, she said. In her 30 years of activism, she’s been jailed, which she said is “just the price you pay.”

She doesn’t know if her activism influences public policies or others’ views, but Sister Brigid believes she is still “sowing seeds of nonviolence.”

“Every time people go to the streets, it’s a message to someone that we will not take it,” she said.

Sister Brigid often writes in candidates when she votes, she said. She doesn’t consider either the Republican or Democratic parties “pro-life,” she said, “until you start helping the poor people and stop wars – those two big things to me are pro-life.”

Korean War veteran K.J. McDonald joined the Republican Party in 1957 to fight communism, he said. Although he has been politically active and served as a state legislator for 14 years, this was the first national convention he has attended, he added.

Now mayor of his hometown of Watertown, Minn., he said he stays in the party because of its pro-life platform.

“After Roe v. Wade, I realized we were in a life-and-death struggle with the forces of evil that wanted to destroy life,” he said.

As a member of the Christopher Movement, he is asked to use his talents to bring the teachings of Christ into all the world, he said.